Each day, I have plans to write about something other than another anti-vaccine myth, like we give our kids too many vaccines. But like Al Pacino said in The Godfather, “just when I thought I was out, they pull me back in.” Now I get pulled into another anti-vaxxer myth.

Unfortunately, my wonderful, well-researched, 15,000-word article about the existence of Sasquatch will have to wait for another day. Yes, it makes me sad.

Seriously, the “too many vaccines” trope pushed by the anti-vaccine religion is one of the most annoying in the discussions about vaccines. Their bogus claim is that we give children too many vaccines too early in life, and that causes all kinds of harm.

Per usual, the anti-vaccine zealots lack any robust scientific evidence supporting their claims, but you know those people – there’s no trope, myth, or meme that they won’t employ, irrespective of evidence, to push lies about vaccines.

So let’s take a look at this old anti-vaccine myth of too many vaccines in light of a recently published, powerful study that provides more evidence that this particular myth doesn’t hold any water.

The too many vaccines myth

This anti-vaccine myth may not be the #1 on the top 10 list of anti-vaccine nonsense, but it’s got to be in the top 3. It’s so pervasive that many parents who actually vaccinate their children delay vaccines because they think that, as a result of the increase in the number of vaccines recommended for children, their children might be harmed by it.

Basically, this pseudoscientific belief states that all of these new and old vaccines inundate the presumably weak and pathetic immune system of children. Of course, once you overwhelm the baby’s immune system, it leads to a whole host of problems, including autism, autoimmune diseases, deaths, and whatever else that strikes the fancy of the anti-vaccine cargo cult science.  Naturally, none of these claims are supported by, well, anything.

Of course, that pseudoscience flows easily into another one (once you buy into one, you’ll buy into another) – vaccinated children are less healthy than unvaccinated children. You can assume that most of the evidence supporting this balderdash is based on anecdotes which are repeated over the internet and really bad science like phone surveys.

Yes, that powerful scientific methodology of phone surveys – I wonder where that fits on the hierarchy of biomedical research. Well, pretty near the bottom.

The whole too many vaccines myth is actually the basis of an oft-repeated trope about Dr. Paul Offit, which states that Dr. Offit said that you could inject a child with 10,000 vaccines, and they will not be harmed.

Dr. Offit would never make that claim because injecting 10,000 vaccines is dangerous. It is not dangerous because of any of the vaccine’s ingredients, it’s because of the amount of water in that many vaccinations – that would be equivalent to 10 liters of water, which would kill anyone, including an adult, as a result of water intoxication.

Thus, I (and many others) contend that there is just no biological plausibility that these many vaccine antigens would have any effect on the child’s immune system except to induce the adaptive immune response to attack dangerous pathogens. Vaccine antigens cannot suppress, damage, or affect that system. Well, except for inducing an immune response that will attack vaccine-preventable pathogens.

The casual reader might be convinced by the too many vaccines myth because it sounds fairly reasonable. That’s why even rational pro-vaccine parents think that delaying vaccines for months or years is a wise and safe decision.

The problem with this thinking is that it is not supported by any scientific data of any note, while the evidence supporting the current vaccine schedule is scientifically solid. The Centers for Disease Control and Prevention (CDC), the World Health Organization (WHO), and dozens of national public health organizations have boatloads of evidence supporting the current vaccine schedules (which has some variance as some countries recommend some vaccines that other countries don’t).

We already have studies that show that the vaccine schedule is not linked to conditions like autism spectrum disorders (ASD). A 2013 study published in the Journal of Pediatrics concluded that “increasing exposure to antibody-stimulating proteins and polysaccharides in vaccines during the first 2 years of life was not related to the risk of developing an ASD.” In other words, “too many vaccines” has nothing to do with autism. But we already knew that vaccines were not causally linked to autism.

Because there will never be enough evidence to convince some people that this particular anti-vaccine myth is bogus, scientists continue to expend resources to keep showing the same point – that “too many vaccines” is just plain nonsense.

Another study debunking the myth

In a study by Jason M Glanz et al., published in JAMA in March 2018, real science once again discredits this deceptive myth. Because it is what I do, let’s give you the highlights of this study, just because I know you all need a quick set of bullet points to contradict the “too many, too soon” vaccines myth.

I always hate crunching down a huge scientific study into a few paragraphs. But I think my obligation is to describe an important study like this in a manner that it can be quickly understood by those who need to embrace the fact that vaccines are very safe. This is a groundbreaking study that destroys an anti-vaccine myth that is part of the fundamental arguments of vaccine denial.

So, here’s that crunching down:

So what did they find?

Well, to sum it up with extreme brevity, nothing. There was simply no statistically significant correlation between increased exposure to vaccine antigens and increased risk of non-vaccine preventable infections. 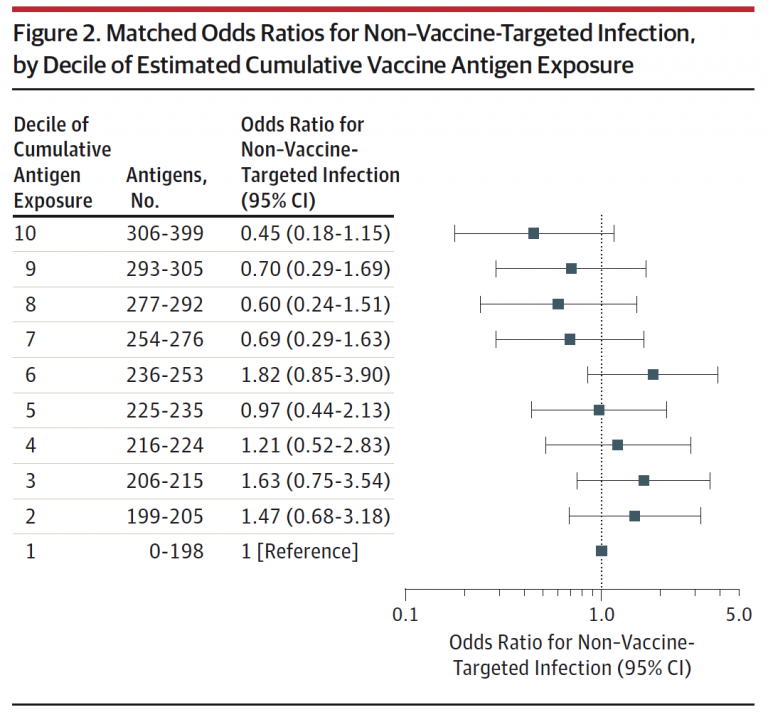 In this first graph (labeled Figure 2), the researchers divided the patients into 10 groups of an increasing number of accumulated vaccine antigens, and none of them showed a statistically significant risk of a non-vaccine preventable infection over non vaccinated individuals. 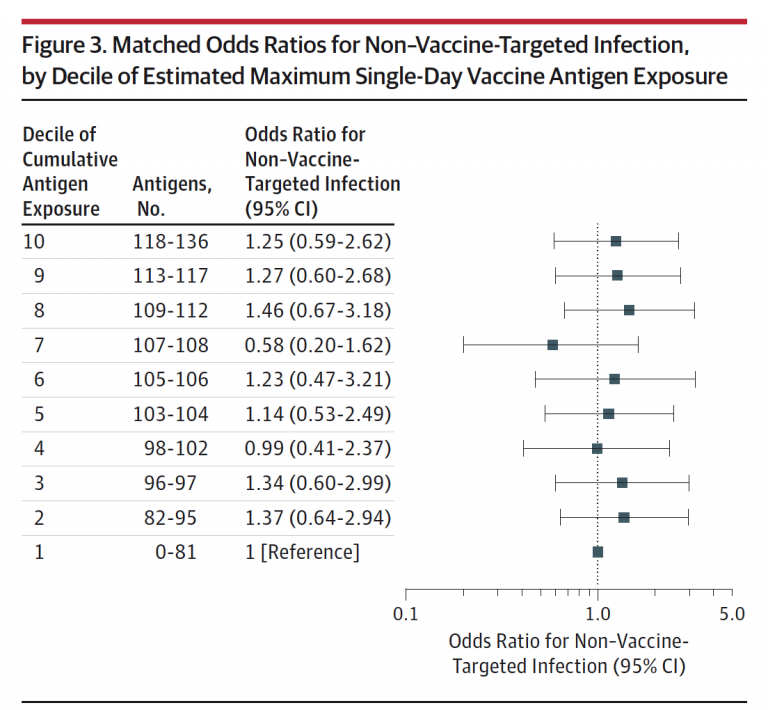 And please, don’t “eyeball” these graphs and tell me that it “appears” that some or many of the average risks were greater than 1.0 (meaning some amount of risk). That’s not how you do statistics, and if you’re going to “eyeball” it, look at the huge error bars. Why do I even have to explain this? Oh right, because the anti-vaccine zealots use some other version of math not used by science.

I know there’s an old adage that science can’t “prove a negative” (setting aside the whole point that science “proves” nothing). But in this case, the study provides evidence supporting the negative – increasing the number of vaccine antigens has no effect on the health of children, at least for these non-vaccine preventable infections.

A summary of “too many vaccines”

Among children from 24 through 47 months of age with emergency department and inpatient visits for infectious diseases not targeted by vaccines, compared with children without such visits, there was no significant difference in estimated cumulative vaccine antigen exposure through the first 23 months of life.

In other words, chances of contracting a non-vaccine preventable infection are not influenced by the number of vaccine antigens received by the child.

In an accompanying editorial published in JAMA, the authors wrote,

The present study provides further reassurance to parents that the US childhood vaccination schedule is safe in terms of not being associated with an increased risk of non–vaccine targeted infections, yet the small but vocal minority of anti-vaccine groups may not be satisfied by the evidence provided through VSD and other vaccine safety surveillance. For example, insistence by such groups that vaccines cause autism  persists, despite overwhelming science to the contrary. Although the VSD and other mechanisms, such as the Post-Licensure Immunization Safety Monitoring system, must continue to study the scientific questions, closer attention must also be paid to fulfilling the VSD’s second purpose of strengthening the public’s confidence in vaccines.

Simply providing scientific information and assuming parents will make the decision to vaccinate is not enough. Delivering evidence-based information to parents and clinicians in ways that inspire confidence in the robust and safe childhood immunization schedule is critical for maintaining the health of children.

I’ve been invalidating false claims about vaccines for nearly 20 years, back before the internet became a commonly used cesspool of pseudoscience and quackery. But myths persist.

The volume of evidence that vaccines are unrelated to autism is figuratively mountainous. Yet there is a stubborn group of people who, despite the science, cannot be moved off of their strongly held beliefs.

And here we have robust evidence that the childhood immunization schedule in the US does not make children unhealthier. Yet, we all know, despite this powerful study that looked at the data with a microscope in numerous different ways, the “too many, too soon” anti-vaccine myth will persist through the internet.

The consequence of this belief is uncomplicated – children will be put at risk for vaccine-preventable diseases, most are dangerous and life-altering. Some of you might think that I’m hitting my head against a wall by pushing these scientific studies, because those who are convinced about the safety and effectiveness about vaccines really don’t need to hear what I write, and those that deny vaccines won’t listen.

But we have to keep going because maybe we convince one person on the fence to vaccinate their children.

As the acidulous Orac wrote regarding this myth,

… it’s important to inoculate (if you’ll excuse the term) those who might be susceptible to the antivaccine message against the misinformation and pseudoscience that drive the antivaccine movement.

I like that. We’re here to “inoculate” against ignorance about vaccines. Not everyone will accept that inoculation, but maybe one person will be. Maybe another. And then another. We have children to protect, so we’ll keep at it.

This article was first published on March 2018. It has been updated to fix broken links, to improve formatting, and to copyedit it like our vaccinated immune system cleans up pathogens.