Although there’s evidence that the anti-science beliefs surrounding vaccines cross a broad political spectrum, I’ve always wondered if rich white liberal women were the center of the anti-vaccine universe – this is based on my own personal anecdotal evidence, so let’s just consider that a belief than a fact. A recent analysis of anti-vaccine tweets may or may not confirm my beliefs about these rich white liberals.

There has been a dramatic increase, over the past few years, in the volume of tweets that claim that life-saving vaccines are linked to autism. Anyone who reads this blog knows that that claim is demonstrably and scientifically false. Despite the science, the belief that vaccines cause autism remains. And this view is promulgated on various locations on the internet.

Like with a lot of other controversial topics, the Twitter outrage about the danger of vaccines doesn’t actually reflect a sudden surge in anti-vaccine beliefs amongst the general population. According to a recently published peer-reviewed article, most of increase in these anti-vaccine tweets represent a very specific demographic. Individuals from affluent, populated areas in five states – California, Connecticut, Massachusetts, New York, and Pennsylvania – seem to be the backbone of this sudden increase in anti-vaccine tweets.

Let’s take a look at this new paper. It could provide us with some information about the who is pushing the anti-vaccine narrative.

The article,  by TS Tomeny et al. and published in Social Science and Medicine, examined anti-vaccine tweets about autism spectrum disorder (ASD) and attempted to correlate these tweets with geographical areas. For the study, Tomeny et al. collected around 550,000 tweets from January 2009 to August 2015 using keywords related to both ASD and vaccines. The keywords included:

I’ve got to believe that dozens of my tweets from that period of time were included in this initial collection. Of course, none of mine are anti-vaccine.

Then the researchers used a machine learning algorithm, which uses pattern recognition and computational learning theory in artificial intelligence, to sort the tweets into pro-vaccine, neutral, and anti-vaccine groups. Overall, the researchers found 272,546 that they considered to be anti-vaccine tweets. Of those tweets, about 108,000 from 47,000 users were geo-coded—based mostly on self-disclosed locations in public profiles—to 732 census Metropolitan and Micropolitan Statistical Areas. 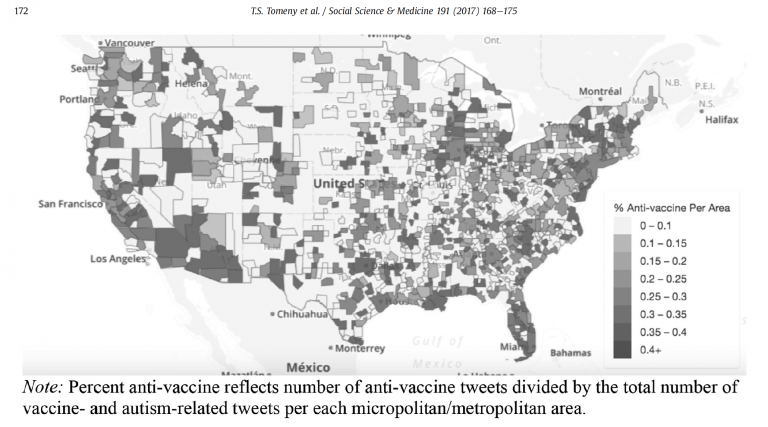 For example, New York’s volume of anti-vaccine tweets jumped by 5X. By January 2015, California’s volume jumped by 10X, probably as a function of the early rumblings to eliminate personal belief exemptions that eventually resulted in SB277, which did just that.

But the most interesting thing was that the bulk of these anti-vaccine tweets came from areas in those states that had common demographic variables.

Overall, the data suggest that the anti-vaccine movement has taken root with affluent, married white women with higher educations and older birth age. And geographically, many of the metropolitan and micropolitan areas that are the source of these anti-vaccine tweets appear to be traditionally liberal areas in fairly liberal voting states.

Despite this analysis, other research may indicate there are other centers of anti-vaccine nonsense. According to the research from the CDC on non-medical vaccine exemptions, several states saw substantial increases in personal belief exemptions, which can be a good indicator of anti-vaccine sentiment. Between 2009 and 2016, researcher has shown that Connecticut, Florida, Iowa, Kentucky, Maryland, New York, North Carolina, North Dakota, Ohio, Oklahoma, and Virginia experienced increases in these personal belief exemptions.

Of course, Tomeny et al. have stated that their study has some limitations. Because of the limitations of their search algorithm, they didn’t examine all anti-vaccine tweets. Furthermore, Twitter users only represent about 23% of all internet users, so it may not be a representative sample. An analysis of Facebook pages and groups may show a different demographic grouping, although many of us notice that the anti-vaccine message on Facebook is skewed to a few areas of the country (mainly California).

Monitoring social media for up-to-date anti-vaccine beliefs allows public health professionals to address such beliefs by targeting geographic areas where these beliefs are most prevalent and tailoring the approach to demographic characteristics of populations most correlated with these beliefs.

The researchers recommended that pediatricians take note of online trends and—if the tweets are coming from inside their areas—press the issue with patients. They also wrote that:

…monitoring social media for up-to-date anti-vaccine beliefs allows public health professionals to address such beliefs by targeting geographic areas where these beliefs are most prevalent and tailoring the approach to demographic characteristics of populations most correlated with these beliefs. Future research should further understand the qualitative variation in anti-vaccine beliefs by geographic distribution and demographic correlates. Further, future research should aim to better identify and track the wide spectrum of negative beliefs about vaccines (e.g., condemnation versus hesitancy) that are expressed on social media.

I guess those of us on the pro-science/pro-vaccine fact-based side of the discussion will have to watch out for postings from California, Connecticut, Massachusetts, New York, and Pennsylvania. We’ll be watching your anti-vaccine tweets.