Of course, this article isn’t really about how much atheists support vaccines, although that should be expected, given the fact that most atheists follow evidence rather than faith or beliefs. This article is going to review the detailed survey because if you’re anyone but Del Bigtree or Robert F Kennedy Jr, you’ll be fascinated to know that the vast majority of Americans support the MMR vaccine.

The Pew Research Center polled Americans in early October 2019 about their attitudes toward the MMR vaccine and compared it to a similar poll from 2016. Despite the fear, uncertainty, and doubt pushed via lies and misinformation by the anti-vaccine zealots, not much has changed. In fact, it appears that Americans are even more supportive of the vaccine. 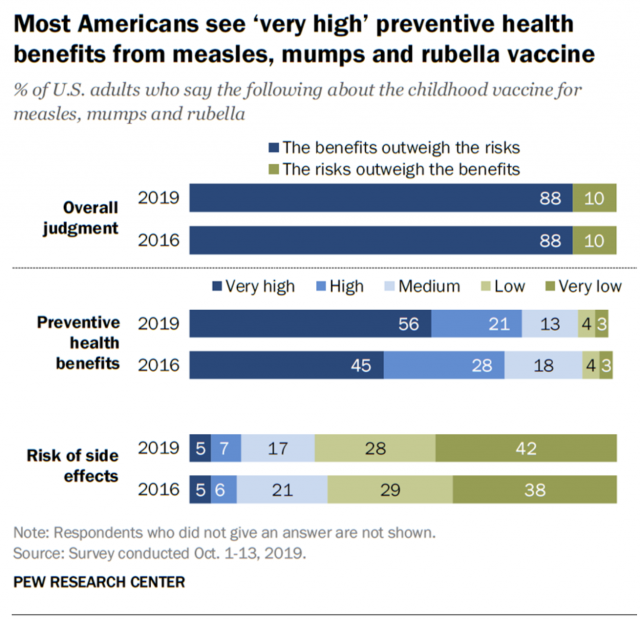 The top-level stats show that around 88% of Americans believe that the benefits of the MMR outweigh any risks. This is the same as in 2016.

However, the next piece of data is even more interesting. About 90% of Americans believe that the MMR vaccine has very high, high, or medium preventative health benefits as compared to about 91%, just a slight dip, although the number who believe it has very high or high benefits has increased from 73% in 2016 to 77% in 2019.

Maybe all of us who are fighting against that anti-vaccine disinformation campaign is having a benefit.

Furthermore, those who believe that the MMR vaccine has a low or very low risk of side effects has increased from 67% to 70% from 2016-2019. Of course, the science, which requires zero belief, shows us that the MMR vaccine is not linked to autism, one of the large concerns about the vaccine. 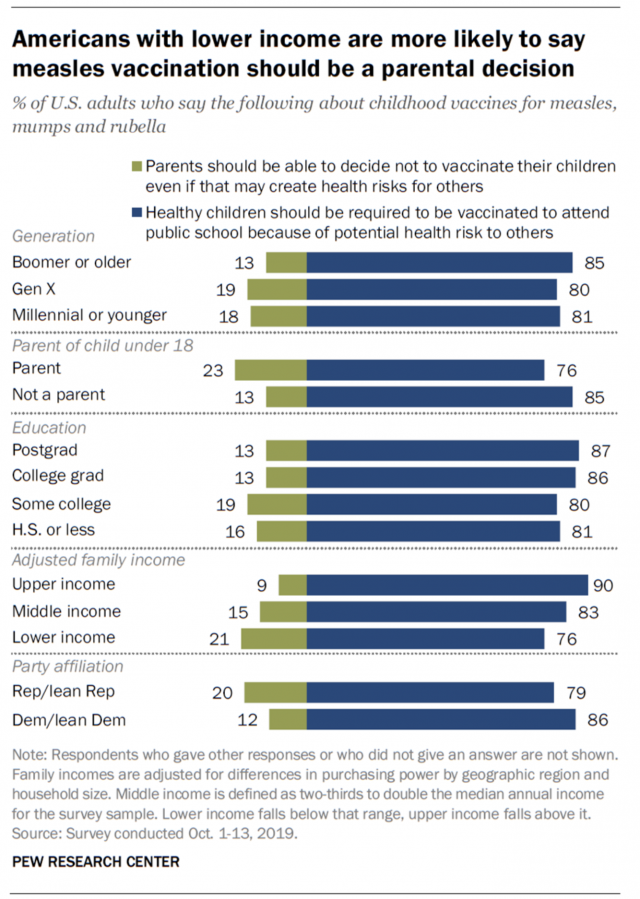 This data is also interesting:

Although these results are somewhat confirmed by anecdotal observations, they are somewhat troubling. We need to make sure that the facts about the MMR vaccine are received by a broader audience.

I have noticed that a lot of anti-vaccine rhetoric tries to make it appear that mandatory vaccinations are a civil rights matter. Bigtree uses offensive anti-semitic tropes comparing mandatory vaccines to the Holocaust, in a vain attempt to seduce the Jewish communities to his lies.

However, the issues with the lower (but not actually low) support of mandatory vaccinations in the lower-income, non-college educated groups may be less about vaccines themselves. It may be more about lower access to quality medical care where physicians can spend time explaining the benefits of the vaccines. 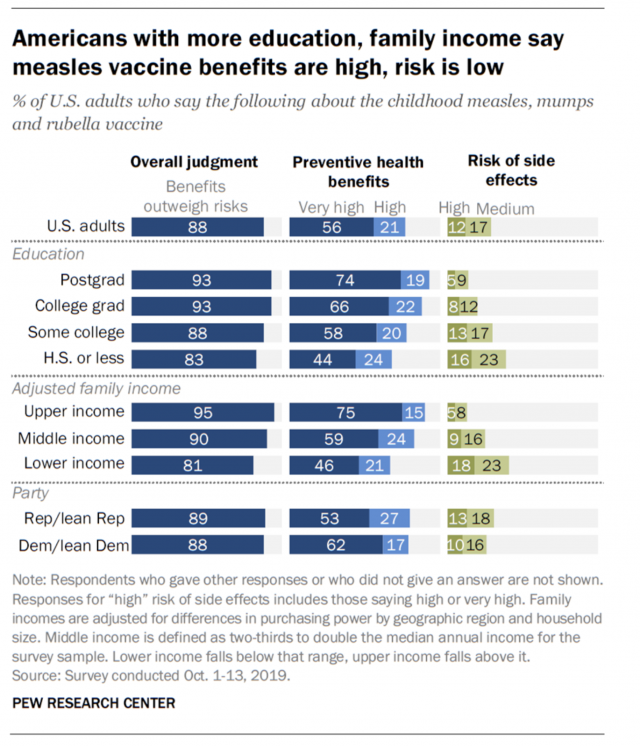 The same dichotomy exists with the benefits vs. risks polling. Against college grads, along with upper- and middle-income groups, believe that the overall benefits outweigh the risks.

One of the more interesting tabulations in this Pew survey was looking at mandatory vaccination acceptance amongst various religious groups in the USA. 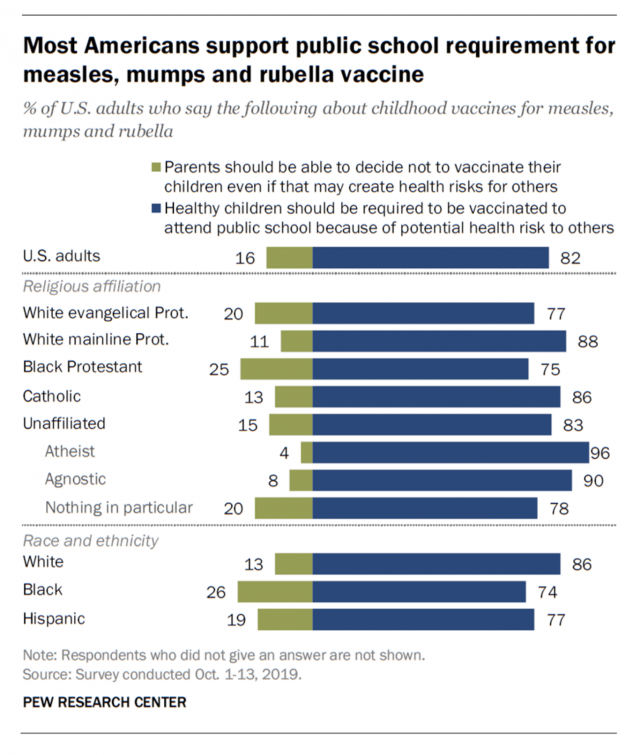 About 96% of atheists and 90% of agnostics support mandatory MMR vaccinations. So not only do atheists support vaccines but also agnostics.

From a religious dogma perspective, no mainstream religions are opposed to vaccinations. Thus, we can conclude that most of those who oppose mandatory vaccinations do so for political reasons, conspiracies, or scientific ignorance. Or something else.

On the other hand, the percentage of Blacks and Hispanics, 74% and 77%, who support mandatory vaccinations are much lower than whites, 86%. As I mentioned above, it may be more an issue with the availability and quality of healthcare as opposed to a general distrust of vaccines. 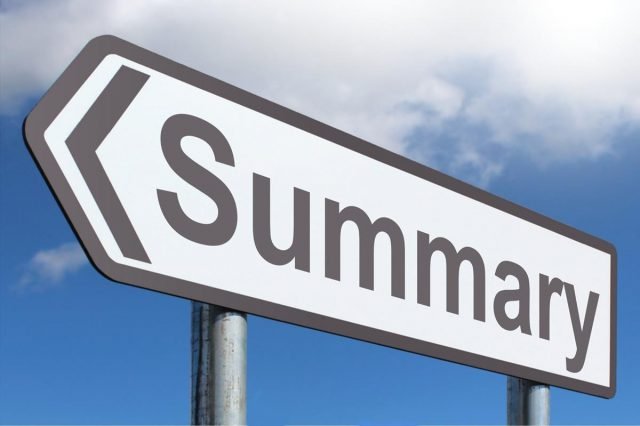 This survey shows that the vast majority of Americans across demographic groups support mandatory vaccines. Of course, the fact that atheists support vaccines in such overwhelming numbers is just a small point.

But, as Hemant Mehta wrote in an article about this poll:

There’s a clear price society pays because large groups of religious people refuse to accept scientific realities. Their ignorance puts everyone at risk.

Scientific ignorance, whether it’s from those with college educations or those who don’t, is very dangerous when it comes to vaccines.

My own feelings after looking at the details of this poll tell me three things: