About two years ago, California’s governor, Jerry Brown, signed SB277 into law, which mandated that all school age children must have all vaccines appropriate for their age before they could enter private or public schools. The law nearly eliminated the ability to get personal belief exemptions (PBE), which allowed parents to object to vaccinations for almost any reason. As a result of this law, it was predicted that the California vaccination rates for school age children would increase substantially, while reducing the incidence of vaccine preventable diseases.

Those of us who have been keen observers and supporters of SB277 were hoping for the best – that the vaccination rate in the state would show increases quickly. First results, released by the California Department of Public Health in April 2017 (pdf), showed a significant increase in the percentage of California’s kindergarteners who were fully vaccinated (for their age group). The vaccination rate for kindergartners rose from 92.8% to 95.6%.

The California Department of Public Health followed up the report on kindergartners with a new one which examined California vaccination rates for 7th graders. It provided more evidence that the stricter vaccination law is having a substantial effect on vaccination rates despite being in place for less than a year. 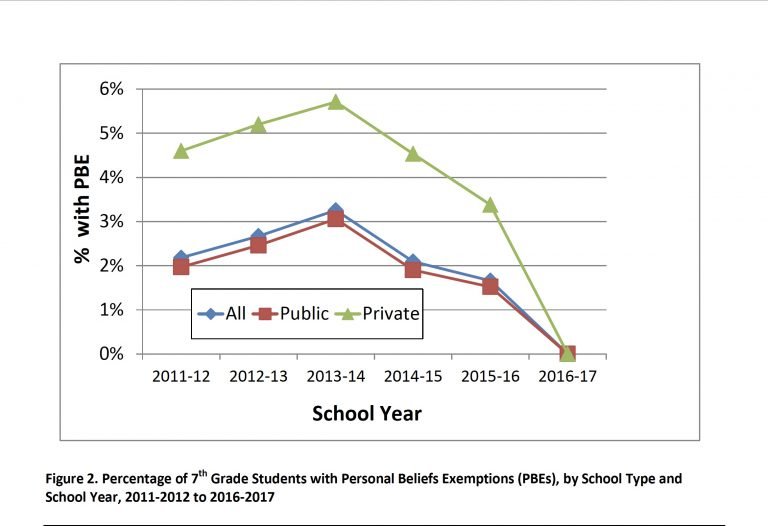 As you can see from the graph above, the PBE rate for kindergarteners has fallen to almost 0 in the one year since the implementation of SB277. Even in outlier counties, such as Nevada County, where anti-vaccine sentiment and high use of PBEs have congregated, there has been a noticeable increase in the vaccination rate.

This clustering effect, or a geographic area with low vaccination rates, in Nevada County led to low immunization rates of 72% for kindergartners and 89% for 7th graders, far below the herd effect level to prevent disease outbreaks.

Since the implementation of the mandatory vaccination law, the immunization rate for kindergarteners rose to 80% and for 7th-graders to 90.5% in Nevada County. Better, but still not among the lowest rates in the state. 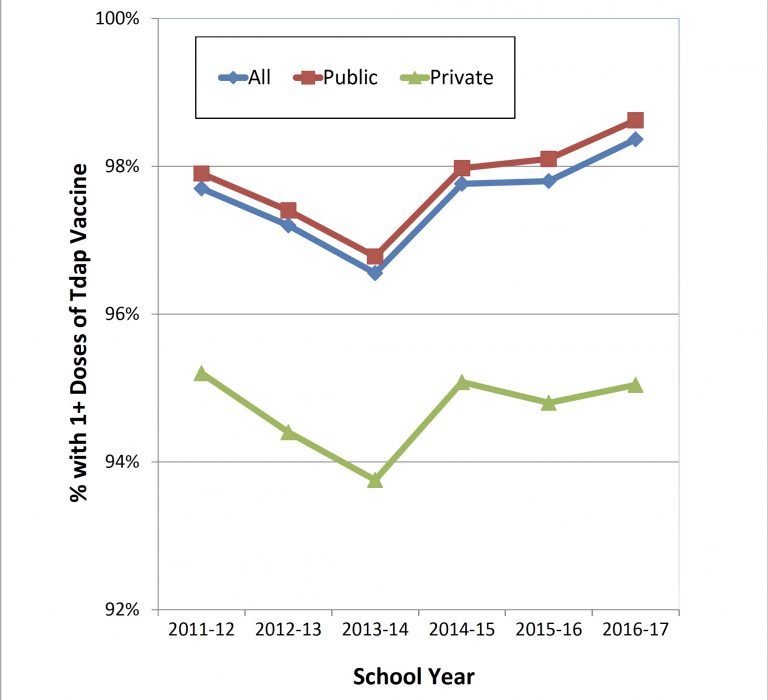 The decrease in PBEs resulted in an immediate increase in the rates of vaccination for the Tdap vaccine (tetanus, diphtheria, and pertussis, or whooping cough). The overall Tdap vaccination rate has reached about 98.5%, although private school vaccination rates still lag behind public school rates by a significant amount.

California’s new vaccination law did not remove permanent medical exemptions (PME), which are exemptions to vaccines as a result of a valid medical condition. These can vary from allergies to one or more ingredients in the vaccine to a medical condition, like immunodeficiency, which results from medications, chronic diseases and other conditions.

In California, PMEs require a physician’s (or other healthcare workers’) signature on a form that clearly states the reasons for the PME. 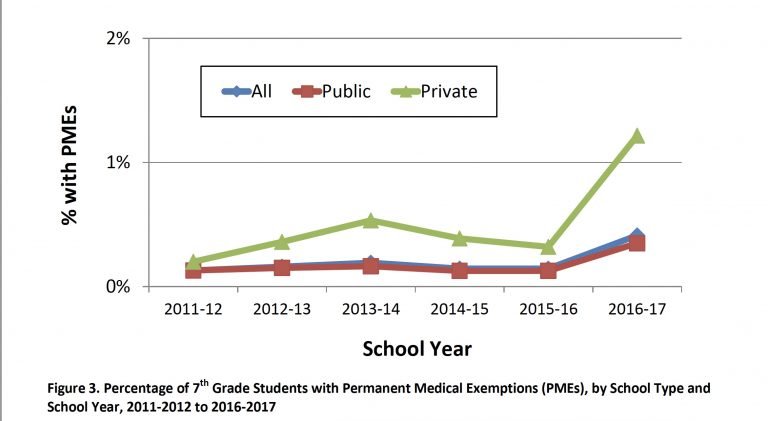 According to data from California’s Department of Public Health research, the PME rate for 7th graders has inched upward, although that increase is much more substantial in private schools.

There could be three reasons for this:

I think if the rate of PMEs continues to increase at this rate, the state should toughen the law, or terminate the licenses of physicians and other healthcare workers who sign these forms without providing a legitimate reason for the exemption.

The goal of California’s vaccine law was to solidify herd immunity. Although the vaccine uptake that confers herd immunity varies by vaccine, the California Department of Public Health is pushing for vaccine uptake of 95% and higher. The higher California vaccination rates go, the greater the protection from vaccine preventable diseases for infants who are too young to be vaccinated, for individuals who are immune-compromised and for the elderly.

This new report shows a lot of good news, but there were concerns. Ten counties, in areas that have been traditional clusters for lower vaccine uptake in the past, currently are reporting vaccination rates below the goal of 95%. As the law is implemented, and abuse of PMEs is restricted, it is hoped that the vaccination rate in those counties will hit the goals of the state.

Despite the incessant attempts by anti-vaccine activists in California to have the law thrown out, the results so far are remarkable. California’s vaccine uptake is going up, personal belief exemptions are going down, and more of our children are protected against dangerous diseases.

It’s time for other states to follow the lead.