These parents found unethical physicians who were willing to sign medical exemptions without the physician actually meeting the child in person, generally for an exorbitant fee. The sponsor of both bills, Senator Richard Pan, MD, observed this abuse and pushed forward SB276 to curb the abuse of California vaccine medical exemptions.

I’m going to try to summarize both SB276 and SB714 together since a compromise between the California legislature and Governor Newsom was necessary to get the law passed and signed.

As a result of some waffling from Governor Newsom, who indicated he would not sign SB276 without changes AFTER he had made similar demands about SB276 several months ago, Senator Pan had to sponsor SB714, which added some of the items that Newsom required before he would sign SB276.

The unsympathetic Orac wrote a commentary on Governor Newsom’s flip-flop:

Reaction to Newsom’s flip-flop from mainstream media sources was virtually all very negative. I, too, wondered what the heck was going on. Did Newsom or his wife have friends or family who thought their children had been injured by vaccines? Did they know antivax quacks who wrote bogus medical exemptions? Is there a big donor who’s an antivaxer? What made him change his mind? It certainly wasn’t a good look.

SB714 adds a few more points, some that are going to end up being new loopholes to the law:

So there we go. It’s not a perfect set of laws, but SB276 and SB714 will definitely eliminate a big chunk of fake exemptions. On the other hand, I certainly don’t trust Governor Newsom any more. He is not going to get my vote in 2022. 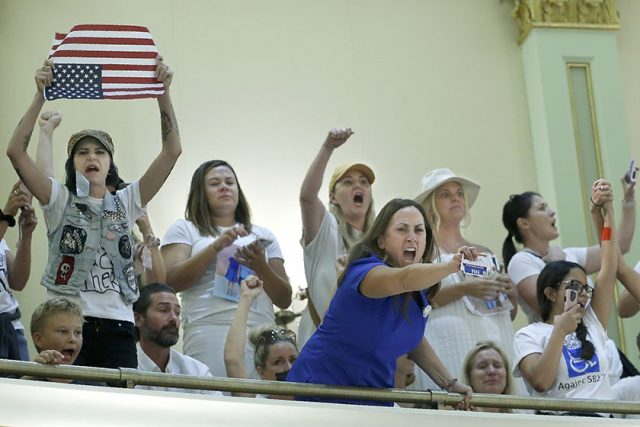 And the anti-vaxxers go crazy

Despite the bill being slightly modified to satisfy Governor Newsom’s nascent anti-vaccine beliefs, the anti-vaccine activists went after the California Legislature (which overwhelmingly approved both bills), especially Dr. Pan, with all of the racism, hatred, and violent rhetoric that has become the standard for these people.

Here’s one example of one of these crackpots screaming at legislatures. Do they really think this works?

Man removed from Senate gallery after he yells at lawmakers during debate on vaccine bill #sb714 pic.twitter.com/WhWneboMh1

Melody Gutierrez wrote in the LA Times about some of their reactions to stop either or both bills:

Opponents of the vaccine bills had hoped Newsom would loosen guidelines on who would qualify for medical exemptions under SB 276, or that the governor’s reluctance was a signal he would veto the bill. Instead, the companion bill seemed to anger anti-vaccine activists, who have remained a fixture outside the governor’s office.

On Monday morning, three women were detained for blocking the garage entrance to the Capitol, which is used by lawmakers, as protests continued outside the statehouse. Seven arrests were made as of Monday afternoon, California Highway Patrol officials said.

“SB 714 did not make the underlying bill better; in many respects it made it much worse,” said Leigh Dundas of the opposition group Advocates for Physicians’ Rights.

It’s also ironic and amusing (or amusingly ironic) that the anti-vaxxers are trying to claim that these laws somehow violate their civil rights. Much like the obnoxious claims that mandatory vaccines are like the Holocaust, which is simply anti-Semitic, they want to claim that they are just like the Civil Rights movement in the USA during the 1960s. 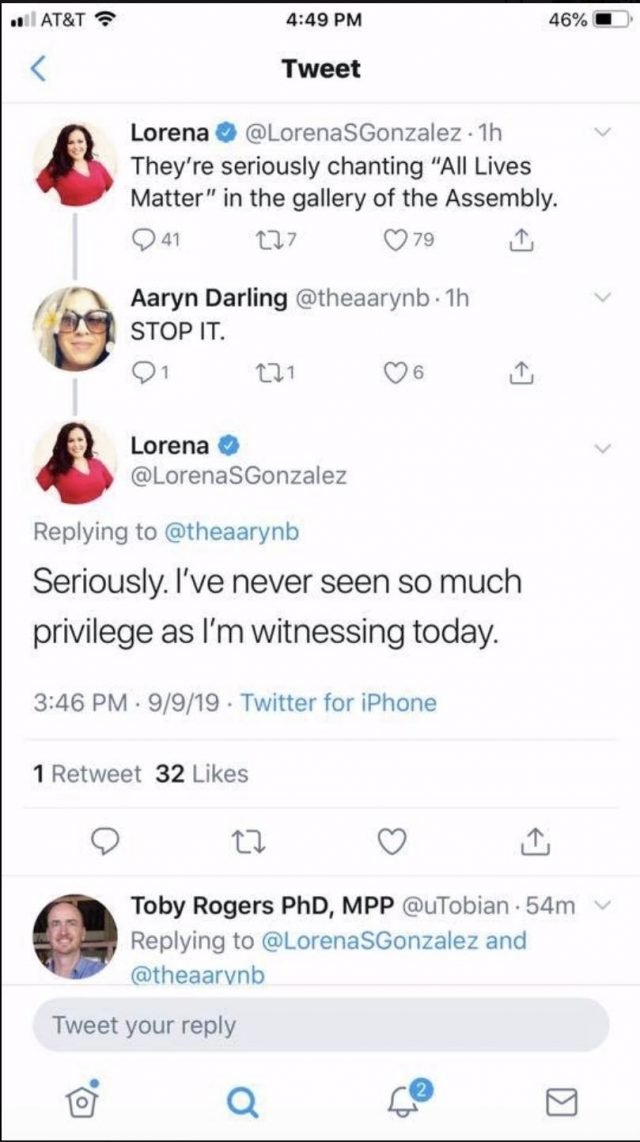 Do they not realize that “all lives matter” is racist? Trying to compare the critical issues for African-Americans to what is almost totally a white issue of vaccine denial is at a minimum, ignorant, but at its core, abhorrent. And disgusting.

Oh, and there’s this meme from the entitled California anti-vaxxers: 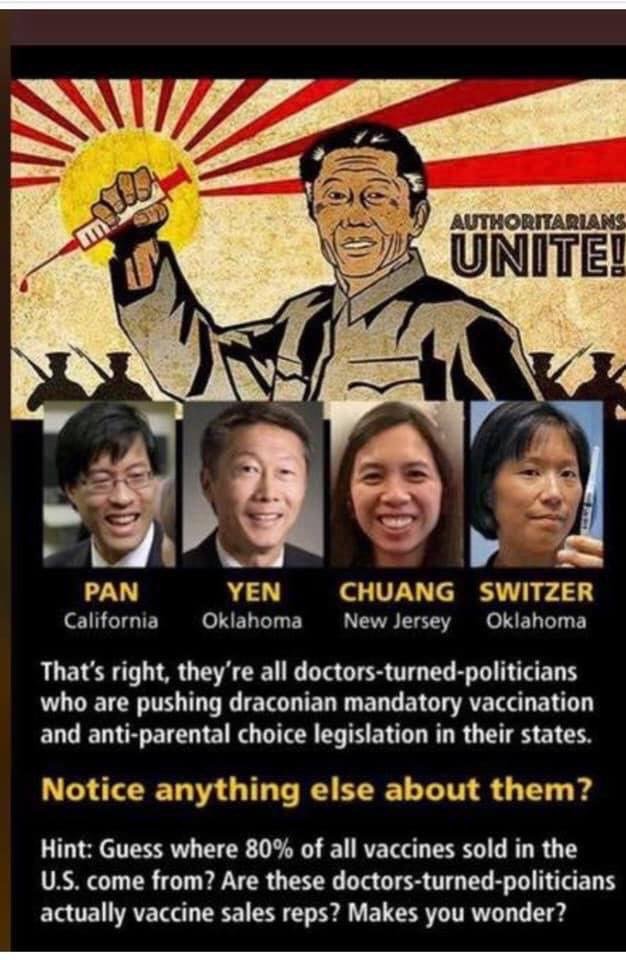 This is so obnoxious, I’m almost reluctant to post it, but here we go. Yes, all of these individuals are Asian. No one cares, but the anti-vaxxers!

But it’s worse. The top image is of some random Asian person, but the background is reminiscent of the Rising Sun Flag of the Japanese military that has been a part of Japanese culture for hundreds of years. But Dr. Pan (and probably the others in the photos) are not Japanese – Dr. Pan’s parents are from Taiwan, and he was born in the USA.

In other words, these anti-vaxxers are going with one of the most classic racial stereotypes ever – “XYZs all look alike.”

The anti-vaccine cultists really are a disgusting group of people.

These new laws aren’t perfect – they are the ultimate example of the art of compromise in politics. We don’t get to subscribe to the Nirvana fallacy, that is, if it’s not perfect, it must be junk.

The law really does shut down much of the quackery that was spawned by the loopholes in SB277, which eliminated personal belief exemptions. It keeps physicians, who prefer cold hard cash to actually worrying about the health of children, from abusing loopholes in the law.

But let’s not be naive. The anti-vaxxers are probably examing the bills in detail, and within a year, we’ll be discussing how they are avoiding vaccinations for their children. It’s because white privilege gives them the ability to find some reason that their genetically superior children don’t need vaccines.

For now, we have a victory for the health of California’s children. We’ll get ready for the next battle down the road.