I’m sure you’ve all heard that President Trump has pushed chloroquine for coronavirus treatment. He claims that there is good evidence supporting it, but if we actually look at that evidence, is there anything there?

Once again, here’s a spoiler alert – the evidence supporting chloroquine for coronavirus is extremely weak. And there seem to be some risks in taking it, so the actual risks may far outweigh the actual benefits. 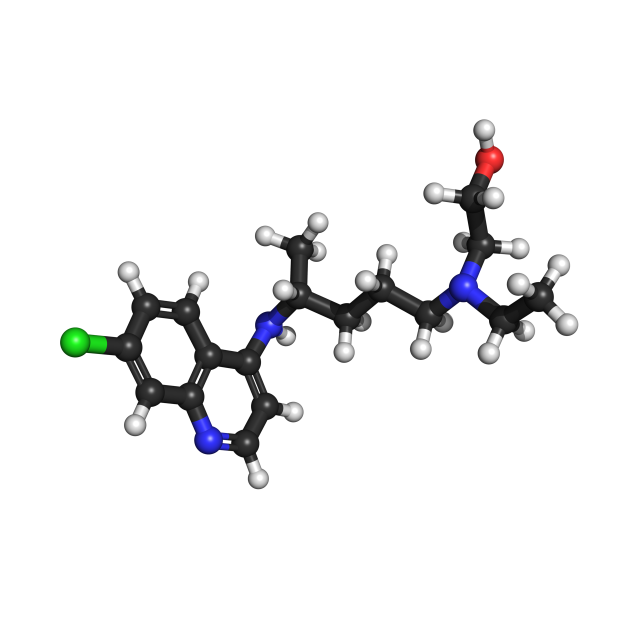 Chloroquine was approved in October 1949 for treating malaria, and it was the anti-malarial drug of choice for many years. It was replaced by newer and safer anti-malarial drugs such as pyrimethamine, artemisinin, and mefloquine.

Although it is no longer used as an anti-malarial, chloroquine and its derivative hydroxychloroquine have found a new life for the treatment of a number of other conditions. Since the drug mildly suppresses the immune system, chloroquine is used in some autoimmune disorders, such as rheumatoid arthritis and systemic lupus erythematosus. It is unclear how chloroquine works for autoimmune diseases.

In addition, chloroquine is used to control the aquarium fish parasite Amyloodinium ocellatum, so many people have the drug nearby.

Importantly, the overdose of chloroquine is very dangerous and can cause death.

Here’s one of the myriads of problems with the US President pushing chloroquine for coronavirus – we don’t know if it works, and because it’s so easily accessed (you can buy chloroquine phosphate for your aquarium without a prescription), results can be disastrous.

An Arizona couple listened to the nonsense from Trump and died from taking the aquarium form of the drug. How many other people will do the same scares me. 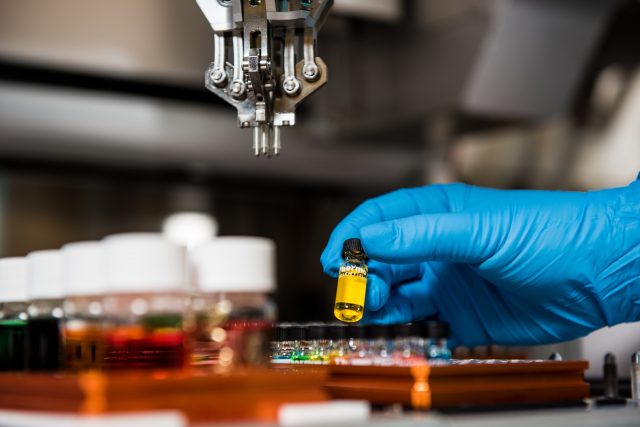 Chloroquine for coronavirus, what’s the evidence?

The claims about chloroquine for coronavirus started with an article published in the International Journal of Antimicrobial Agents, a moderately low impact factor journal. It is my opinion, shared by many, that something of this importance should have been published in a major biomedical journal as a rapid communication. It’s not that we should dismiss it because of where it’s published, but it is somewhat suspicious.

Basically, the authors examined the viral load of the patients after they received hydroxychloroquine and an antibiotic. They determined viral loads using a PCR assay.

There are two scientists whom I trust that have ripped this study into little pieces, which I will discuss below. But I have several problems with the study from my point of view.

First, the experimental design is bad. I mean so bad, that I can’t believe anyone would ever consider this paper publishable. Here’s how they set up study:

This is not what I would call a robust, powerful clinical trial. It’s small. There was no randomization. It was not double-blinded. The “controls” were not patients who were in the same medical center, who would, presumably, receive the same kinds of treatment. And let’s not forget that in all clinical trials, the control group is blinded to both the patient and the treating physician.

Randomized, double-blinded clinical trials are the “gold standards” of medical research because they try to remove biases like confirmation bias and selection bias. They are the foundation of science-based medicine.

Furthermore, the authors seem to have violated one of the basic tenets of clinical research – intention to treat. The researchers did not include anyone who died or who was transferred to the ICU.

According to a thorough analysis of this study by Skepchick:

That means that you analyze everyone enrolled in the study, regardless of whether they complete the trial or not. This allows the effects of death, non-compliance, cessation of treatment because the side effects are intolerable, etc, to be included and for the impacts of a treatment to be fully considered beyond a narrow group. It gives you more of the drug’s true effect, not simply the effect in the best, most compliant patients.

In the H (hydroxychloroquine) group, participants who stopped taking the drug, died, or went to the ICU were not included. This is hugely problematic because the criteria were not applied uniformly and the outcome in the H group may be the result of only including very robust participants. Patients that are dead or in the ICU and not monitored may have higher viral loads that would not be reflected in the data if these participants are eliminated.

I wish I could show you a photo of me hitting my head on the desk. Why on earth was this study even published? Is it because journals want to get anything they can about coronavirus?

Other scientists give their opinions

A respected scientist I know, who has extensive experience in using PCR assays for scientific research took a look at the viral load data from this paper. She focused on this chart: 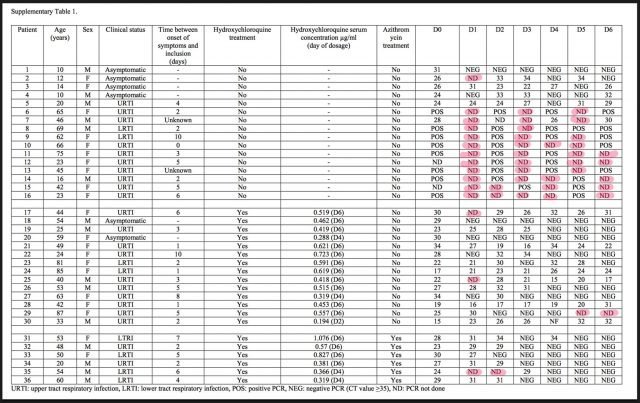 First of all, you see all of those “ND” highlighted in pink? Well, when most scientists see “ND,” it usually means “not detected.” That sounds good. Except for Gautret et al., it means “not done.” In other words, there is a boatload of missing data that is more support for my belief that this study should not have been published.

The outcome of drug treatment, and therefore success, was measured as changes to viral load. The researchers measured viral load in controls and treated patients by qRT-PCR.

Except when they didn’t, as indicated by the pink highlights on the screenshot. D = days after treatment regime began and the numbers (although not explained) are probably the signal of the viral RNA (ie, the Ct for the sample).

So, the researchers didn’t do PCR on many of the samples from the control patients AND concluded that the controls had less virus by the end of the trial. This is because they didn’t even measure it. This is why there are no error bars on the graphs. This is why they should have done a blinded trial.

PS: I can’t find what “POS” means in the screenshot. It has been suggested that they did a qualitative analysis of the PCR product (ie ran it on a gel) but this is not in the methods that I can see.

Tl;dr this is BAD science and, as a reviewer, I would not have accepted this study for publication.

Well, I know what POS means, but that would be rude. Anyway, a real scientist who does PCR analyses as her career thinks this is BAD science. I agree.

Dr. Elisabeth M Bik, who has made a career of finding bad science in published articles and whom I’ve quoted before, criticized this article heavily in PubPeer:

The paper was submitted on March 16, and accepted on March 17. This seems impossibly fast. As obvious from the long lists of comments on the preprint version, a thorough peer review process might have been able to find several important concerns with this paper. Thorough peer review is simply not possible within 24h. Indeed, the paper appears to have been published virtually unchanged from the preprint version.

One of the authors on this paper is also the Editor in Chief of the journal in which the paper was accepted, i.e. the International Journal of Antimicrobial Agents. This might be perceived as a huge conflict of interest, in particular in combination with the peer review process of less than 24h.

So 4 of the 26 treated patients were actually not recovering well. It seems a bit strange to leave these 4 patients who got worse or who died out of the study, just on the basis that they stopped taking the medication (which is pretty difficult once the patient is dead).

This also goes with what I wrote above about the “intent to treat,” but this is bad. They keep excluding patients that don’t support their conclusion – this is why we do double-blinded randomized clinical trials.

Only qPCR from a nasal swab has been taken here as an endpoint, not clinical endpoint (which was worse), not infectious virus (cpe from nose swabs was only observed from 19/25 patients (where is 26?), not tested in controls). A PCR positive patient does not necessary mean a virus shedding patient or an ill patient.

I want to make a basic point – anyone who calls this a “clinical trial” is wrong.

Despite this terrible study design and the criticism from several scientists, Gautret et al. concluded:

Despite its small sample size our survey shows that hydroxychloroquine treatment is significantly associated with viral load reduction/disappearance in COVID-19 patients and its effect is reinforced by azithromycin.

President Trump must have read just this one sentence and decided that hydroxychloroquine is THE cure for COVID-19. Despite his beliefs or wishes, this study’s results are not evidence that we should use chloroquine for coronavirus.

But his comments (and from other pseudoscientists) have consequences:

Yes, COVID-19 is scary. Yes, we lack vaccines or effective treatments. But we have no evidence that chloroquine for coronavirus works. And it’s dangerous for the President or anyone to make that claim.