This article about the tragic story of Christopher Bunch was written by Dorit Rubinstein Reiss, Professor of Law at the University of California Hastings College of the Law (San Francisco, CA), who is a frequent contributor to this and many other blogs, providing in-depth, and intellectually stimulating, articles about vaccines, medical issues, social policy, and the law.

On 14 August 2018, fourteen-year-old Christopher Bunch died from acute disseminated encephalomyelitis (ADEM), leaving his loving, devoted family reeling. The family blamed his death on the HPV vaccine that Christopher received, and they were quickly surrounded and courted by anti-vaccine activists.

My heart goes out to Christopher’s family. I followed the case since he was in the hospital, hoping and praying with them for a good outcome, and I feel their heartbreak. I was also deeply impressed by their initial reaction, which was to create a positive legacy for Christopher, making him visible and famous.

I would rather not write about this, which is why this post is so long after the fact. But Christopher’s death is since being used to try and scare people away from HPV vaccines or vaccines generally, putting others at risk of cancer and death. With very little basis: the timing and the epidemiological evidence do not support a link between Christopher’s death and HPV vaccines. Christopher Bunch deserves a better legacy than that.

What happened to Christopher Bunch

By all accounts, in the summer of 2018, Christopher Bunch was a vibrant, active fourteen-years-old. He played football, had a YouTube vlog, and a full life typical for many American kids his age.

Then, in August 2018, he came home complaining of a headache. 48 hours later, as his symptoms worsened, he was rushed to the hospital. There “he lost the ability to breathe on his own and became paralyzed on the left side of his body. According to his family’s fundraiser, he underwent surgery on Aug. 11 to relieve brain swelling, but he remained in a critical state.”

From around 9 August 2018, Christopher’s story was shared on Facebook, including in anti-vaccine groups. Anti-vaccine groups shared it because Christopher’s mother, Mrs. Destiny Maynard, mentioned vaccines. That is when I saw the tragedy, and followed it from that moment, hoping, along with his family, for a good outcome. It was an extremely painful situation. 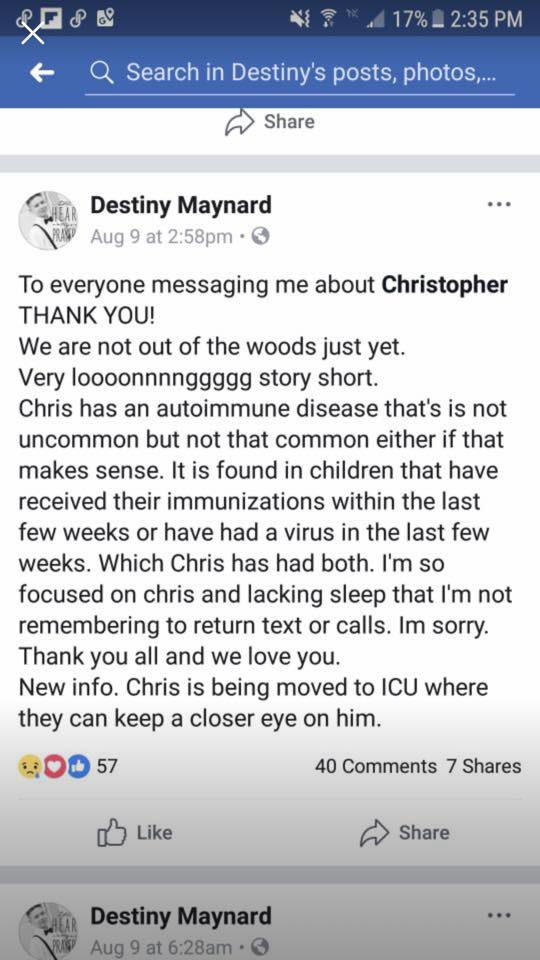 That post has since been changed. Now it says:

Chris has an autoimmune disease that’s is not uncommon but not that common either if that makes sense. It is found in children that have received their immunizations within the last few weeks or have had a virus in the last few weeks. Which Chris had his HPV vaccination just a few weeks ago.

But friends of mine have kept the initial screenshot, which also echoes what contemporary news reports of the story say:

Unfortunately, there was no relief, no good outcome. On 14 August 2018, Christopher Bunch died.

His hurting family set out immediately to create a positive legacy for him, with internet attention and memorabilia – they received an outpouring of love from the community.

Naturally hurting, the family was courted by the anti-vaccine movement. At some point, they became convinced the HPV vaccine was to blame for the death. The family mentioned a letter from their neurologist, but no copy of that letter is available online, and we can only guess at what it said – and that, in turn, would depend on what the neurologist heard from the family.

There is no evidence supporting a link between HPV vaccines and ADEM, an autoimmune disease. According to Vaxopedia,

Acute disseminated encephalomyelitis (ADEM) is characterized by a brief but widespread attack of inflammation in the brain and spinal cord that damages myelin – the protective covering of nerve fibers. ADEM often follows viral or bacterial infections, or less often, vaccination for measles, mumps, or rubella.

ADEM is a serious, life-threatening condition, though it can be treated. It is usually preceded by a viral or bacterial infection. Rarely, it can happen after a vaccine. The incidence of ADEM is so rare that it is difficult to conclusively establish a link between any vaccine and ADEM. This is further complicated by the fact that 30% of ADEM cases do not have a known trigger.

So we have a very serious, potentially fatal event, that can, in rare instances, happen after vaccines, though is much more likely after infections, including infections that vaccines prevent (in other words, you’re less likely to get ADEM if you vaccinate).

But “after” is not always “because”. The question is, do vaccines cause ADEM? A recent study examined this in a database with 64 million vaccine doses. It found a slight increase (excess risk of 1.16 cases of ADEM per million vaccine doses) in the risk of ADEM in the 5-28 days following Tdap vaccines. But not for other vaccines, including HPV.

Other large studies that looked at HPV vaccines and demyelinating diseases also did not find such a link (here, here, and here).

Inevitably, when you vaccinate large numbers of people, you will have some bad things happen after the vaccines. Hundreds of millions of doses of HPV vaccines have been given worldwide. And some individual cases of ADEM were reported after HPV vaccines (in both these studies, after the second dose).

These cases can raise a question of whether there is a link; but single observations like this – or like Christopher’s case – cannot show a link, because some such cases are bound to happen by coincidence alone. The large studies cited above examine whether these individual reports are a coincidence or show a causal connection, and they suggest that these reports are coincidental. Not surprising: extensive evidence – and biological plausibility – go against a link between HPV vaccines and autoimmune conditions

In Christopher’s case itself, there are other reasons to doubt a link. First, the timing is problematic. Christopher’s ADEM manifested, according to his father, 40 days after the vaccine. That is a long time. In the large study of ADEM and vaccines, the interval chosen by the researchers was 5-28 because that was when ADEM usually manifests. They added 5-42 days just in case, to catch any pattern, but from their review, that seems to be an unusual timeframe for ADEM.

Finally, his mother has initially mentioned that he also had a viral illness in the weeks before showing symptoms of ADEM. Infections are much more commonly associated with ADEM than vaccines, and there actually is reasonable evidence for a link between infections and ADEM, evidence that is just not there for a link to HPV vaccines 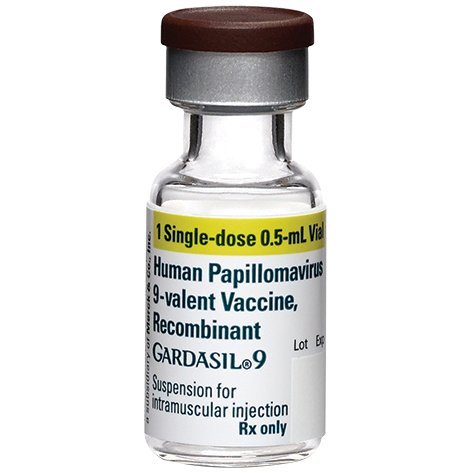 While it is too early to see HPV vaccines full effect on cancer yet, a large body of studies – large and growing – show that it is very effective at doing exactly what it is supposed to do – preventing the infection that leads to cancer, the pre-cancerous lesions, and yes, cancer

In other words, this is a life-saving vaccine. Studies in millions, and monitoring data from hundreds of millions from all around the world, also show the vaccine extremely safe.

As the World Health Organization puts it:

Since licensure in 2006, over 270 million doses of HPV vaccines have been distributed. GACVS first reviewed the safety data in 2007, and subsequently in 2008, 2009, 2013, 2014, and 2015. Early on, the Committee was presented signals related to anaphylaxis and syncope. The risk of anaphylaxis has been characterized as approximately 1.7 cases per million doses, and syncope was established as common anxiety or stress-related reaction to the injection. No other adverse reactions have been identified and GACVS considers HPV vaccines to be extremely safe.

So we have an extremely safe vaccine that prevents cancer.

I feel sad for Christopher Bunch and empathy towards his family. They suffered a tragedy no family should endure.

But I also feel for the victims of HPV infections, and even more so for those put at risk because of Christopher’s story. Using a tragedy to cause more tragedies just makes things worse.

I hope his family finds better support than the anti-vaccine movement. And I hope they find peace.

This article was first published in March 2019. The article was updated to repair a couple of broken links and to fix some spelling and formatting issues. Also, this case has re-emerged in the anti-vaccine world.