This article about how the coronavirus pandemic will affect conservative red states was written by a database expert who wishes to remain anonymous.

Among my more right-leaning Facebook friends, the attitude towards the coronavirus pandemic goes roughly like this: “The outbreak isn’t anywhere near as bad as the Liberal Media would have you believe. It’s almost entirely confined to sanctuary cities. Everyone should stop overreacting!”

For everyone else, this attitude seems delusional. But for people who live in right-wing communities, the “it’s not so bad” point of view is actually in line with observed reality. And the way that the media has been reporting on the outbreak actually exaggerates this effect.

I have my own personal set of reports on the spread of COVID-19 that I run every evening. My primary input is the Johns Hopkins data set. They have county-level statistics on confirmed cases and deaths by county for much of the United States, going back to March 22. New data appear each day around 6 pm Pacific Time.

I combine the Johns Hopkins data with two other data sets:

You’ll see why in a moment.

The first thing you’ll probably see on any coronavirus dashboard is a map of the United States, color-coded by the number of confirmed cases. Here’s one from April 7, 2020:

Yellow is pegged to the 95th percentile, and white indicates counties with missing data.

Pictures like this one show up frequently in the news. The New York Times maintains a map like this. So does The Guardian and the CDC.

If you look at today’s map, you see that there are big, widespread outbreaks around New York, Los Angeles, and Seattle. There are also more concentrated outbreaks showing up in New Orleans, Detroit, San Francisco, Denver, and Miami.

And take a look at the Deep South.

The virus is widespread across Louisiana and Mississippi. There’s a huge outbreak centered around Albany, GA. And things aren’t actually so bad in Florida after all.

Another place where things aren’t actually so bad is California.

Different perspective on the coronavirus pandemic in the USA

Looking at the number of confirmed cases without normalizing to population density distorts the data. It makes it looks like the infection rate is high in places where it is not, and vice versa. You can see this distortion at the national level if you group counties by decile of population and track confirmed cases over time. Here are the absolute numbers: 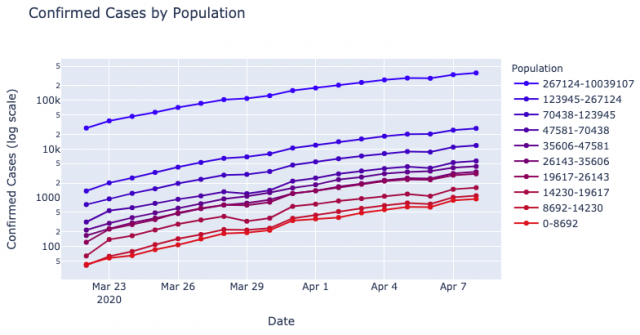 And here’s how it looks normalized by population:

Note the logarithmic scale on the Y-axis. That should scare you.

The absolute numbers make it look like the outbreak is an urban event. Counties with high population density have many more cases. But in the bottom chart, you can see that, aside from New York City, the entire country is pretty much in one bucket as far as the progression of the pandemic.

It turns out that there’s another variable that is highly correlated with where a given county is on the coronavirus curve: What fraction of the county voted for Trump in 2016.

Here’s the progression of confirmed cases per 100 residents, broken down by vote:

You can see a clear gradation from red to blue in the chart. Outside of New York City, each 10% of additional votes for Trump correlates with being about half a week further back on the curve.

And lest you think this spread is due to deliberate underreporting in “red” counties, the same trend shows just as clearly in the death statistics, which should be harder to fake:

But the reality is that things are not at all OK. All of the lines on the log-scale plots above run parallel to each other, which means that all those lines are actually *the same line*, just offset in time. Here’s the earlier plot of deaths per 100 residents over time, except now I’ve shifted each series to the left to align with the “0-10% Trump” series:

The first few points of the “0-10% Trump” line are steeper because social distancing hadn’t started back then. After that, every group of counties converges to the same curve.

In a few weeks, things are going to start getting really bad in Trump country as a result of the coronavirus pandemic. They just don’t look that bad right now.