Over the past week, I have observed how dangerous vaccine deniers have exhibited hatred to everyone and everything that supports vaccination. And despite their demented claims, it is settled science that vaccines are very safe and very effective.

First, soon after California Governor Gavin Newsom signed two bills, SB276 and SB714 which were led by Dr. Richard Pan through the legislature, the anti-vaccine activists went off the proverbial deep-end.

Then, Prof. Dorit Rubinstein Reiss wrote a heartfelt, logical, and thoughtful article about the death of Evee Gayle Clobes, probably as a result of improper co-sleeping arrangements, and not from vaccines, as the mother and anti-vaccine zealots claim. The personal attacks on Prof. Reiss were disgusting.

So, I wanted to speak about these two issues, because it shows that these dangerous vaccine deniers really don’t have any evidence supporting their beliefs. As a result, they have to resort to violence, either literal or metaphorical. Either way, they are deranged.

Yes, they really did get weird.

First, the vaccine radicals decided to compare themselves to the Civil Rights Movement of the 1960s. Here’s what Politico, not exactly the most liberal website, wrote about one incident:

A chorus of mostly white women sang the gospel song “We Shall Overcome” in the California State Capitol, an anthem of the civil rights movement. Mothers rallied outside the governor’s office and marched through Capitol corridors chanting “No segregation, no discrimination, yes on education for all!” Some wore T-shirts that read “Freedom Keepers.”

This is similar in many ways to how Del Bigtree tried to compare mandatory vaccinations to the Holocaust while wearing the Yellow Star that the Nazis ordered Jews to brandish. That was simply anti-Semitic.

And trying to compare a privileged white science denial movement to Civil Rights demeans the legacy of blacks who had to literally fight for their rights to vote, to sit in a restaurant, or drink from any water fountain they wanted. Making that type of false equivalence is simply racist. 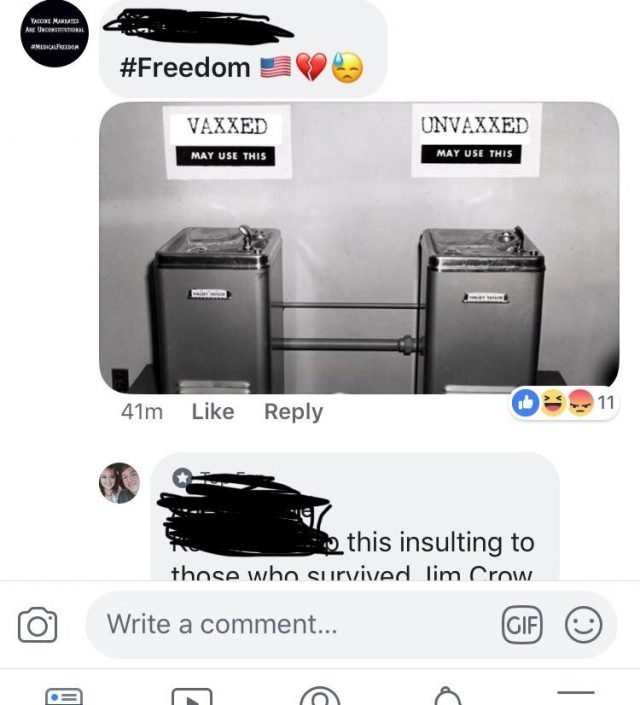 This is a meme that has been passed around the anti-vaccine cult, trying to compare the offensive black vs white drinking fountains (I shudder to even think that was a part of America) to vaccinated vs unvaccinated children will face.

Let’s be clear about something – there is no discrimination. The job of public health officials is to protect Americans from vaccine-preventable diseases. Parents who reject the overwhelming science about vaccines because they did their Google University “research” put all children at risk of disability or death from dangerous diseases. And it’s not just their children, but children who are too young to be vaccinated or children who are immunocompromised.

There are zero comparisons between mandatory vaccines and the horrific institutional racism of the 1960s (and even today). If the parents don’t want to vaccinate because of their irrational pseudoscientific beliefs, then nothing is going to happen to them. They just can’t send their kids to schools.

Those privileged whites who believe that their organic blueberry-kale, non-gluten, non-GMO smoothies are all their kids will need for perfect health, because, of course, they think that privileged whites are superior to the rest of us. It’s disgusting.

But these dangerous vaccine deniers are much worse than that.

A woman was arrested Friday on charges including assault after dropping what authorities said “appeared to be blood” on members of the California Senate from her seat in the visitor gallery. The disturbance occurred as lawmakers were wrapping up their work before adjourning for the year, forcing them to evacuate the chamber to continue in a nearby committee hearing room.

The woman, who was identified by California Highway Patrol officials as Rebecca Dalelio, 43, was among dozens of protesters who were inside the state Capitol to oppose a pair of bills signed Monday by Gov. Gavin Newsom to impose new oversight of childhood vaccine exemptions. Public records show Dalelio is a resident of Boulder Creek near Santa Cruz, and a Facebook profile matching her photo and name contains multiple postings critical of vaccines, the last one made in March. A phone call to Dalelio seeking comment was not returned.

Authorities roped off the Senate chamber with caution tape Friday evening as CHP and Senate officers began an investigation. The CHP later said in a statement that the blood-like substance was contained in “a feminine hygiene device” reported to be a menstrual cup held by the woman, who was arrested and booked into Sacramento County Jail on six charges including assault, vandalism and disorderly conduct. Dalelio was released Saturday morning.

Despite some anti-vaxxers feigning a disavowal of her behavior, the continued violent, hate-filled rhetoric pushed by these people encourages others to think that violent acts will make them heroes and martyrs for their ignorant, pseudoscientific movement.

In an editorial in the LA Times, in response to a physical attack on Dr. Pan, wrote:

Anti-vaxxers do the job quite well themselves by rejecting the overwhelming evidence that vaccines are safe for almost everyone in favor of crackpot theories about an evil government colluding with avaricious pharmaceutical companies to hurt Americans — for reasons never quite made clear.

That’s baloney. The truth is that the anti-vaccination crowd, including such prominent names as Robert F. Kennedy Jr., has been casually deploying violent language and imagery for years in its attacks on Pan. It’s disingenuous for these activists to spend years harassing Pan, painting him as an evil doctor who wants to hurt children, and then profess disbelief that someone acted on the messages. You can’t traffic in this type of loaded language and then claim you didn’t mean for anyone to get hurt.

Yes, this “violent language and imagery” plus trying to make it a faux civil rights movement just to put children at risk of dangerous diseases needs to stop.

But then it took another direction.

This violent rhetoric and imagery got dark and troubling after Professor Reiss’ article about Evee Gayle Clobes was posted. Evee was found dead by her mother, Catie Clobes.

In the very logical article, Prof. Reiss showed first, that Evee probably died from co-sleeping arrangements with her mother, and second, it had nothing to do with vaccines. She did not provide an opinion about what caused the tragedy, she just provided facts, including the fact that vaccines are not linked to SIDS.

So, Catie Clobes posted a threat to sue us on her Facebook page. That’s not the issue, because she is an angry, devastated mother who is searching for answers by jumping into the arms of the manipulative, lying anti-vaccine religion. I can somewhat sympathize with her reaction, but just barely.

The problem is with the angry, hate-filled, violent remarks from people commenting on her: 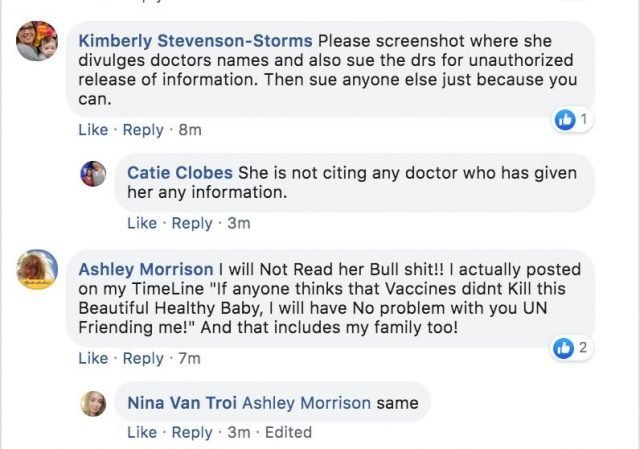 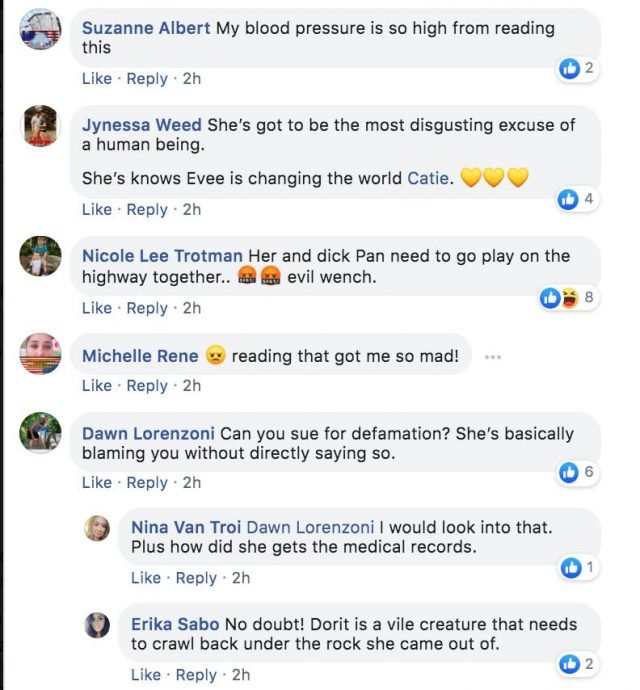 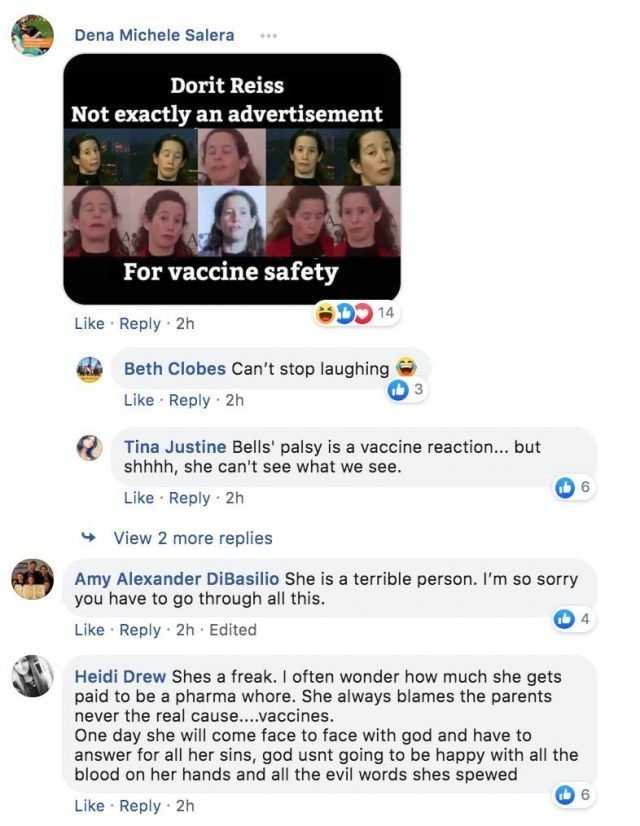 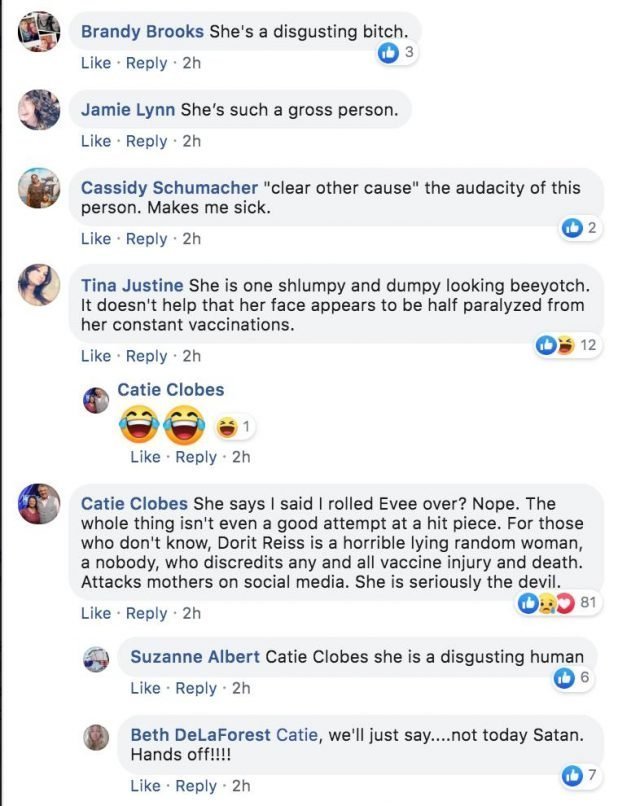 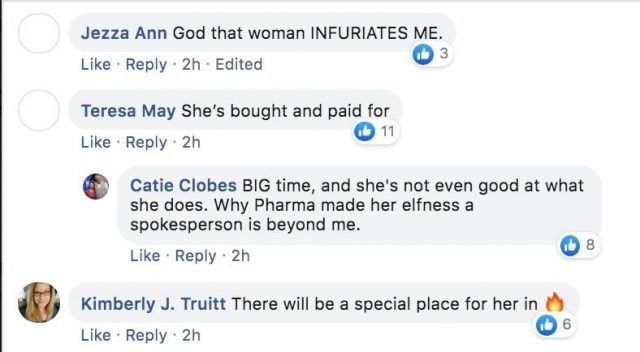 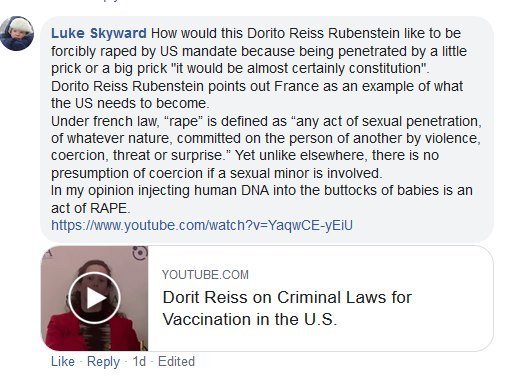 The last one is particularly disgusting – Luke Skyward, obviously a misogynistic Trump supporter, suggested that Professor Reiss be “forcibly raped.” I wrote once that comparing actual rape, a violent act, to vaccination was disgusting. Obviously, Luke didn’t read that.

And of course, there’s the usual litany of “Big Pharma Shill,” along with a boatload of other disgusting metaphors and accusations. These people are vile, evil, abhorrent examples of humans.

Do these fools think that this kind of rhetoric is going to convince anyone? Do they think that any of the vast majority of legislators who voted for SB276 and SB714 are going to want to associate with these people?

These dangerous vaccine deniers are symbolic of what we see in the world today – demagogues and liars capture interest more than logic and science. The problem is that children are put into the headlights of the onrushing train of vaccine-preventable diseases. We need to stop that.