On 11 February 2019, Health Impact published an article about a flu vaccine lawsuit which an anti-vaccine group called the “Children’s Health Fund” described as a legal win and revelation. The claim was based on a response to a Freedom of Information Act (FOIA) request that did not, in fact, reveal any new information.

The flu vaccine lawsuit also did not counter the basis of expert agencies and organizations recommendations that pregnant women be vaccinated against influenza to protect themselves and their newborns. This article will review the facts of this action.

The flu vaccine lawsuit – the case

Apparently, on 3 December 2018, Robert F. Kennedy jr., representing the anti-vaccine organization The Informed Consent Action Network (ICAN), filed an FOIA request with the FDA for  “a copy of the report for each clinical trial relied upon by the FDA when approving for use by pregnant women any influenza vaccine currently approved by the FDA.”

Apparently, the request was based on stories of miscarriages after influenza vaccines (see below on that issue).

These requests sought the clinical trials relied upon by the FDA prior to approving any currently licensed influenza or Tdap vaccine for use in pregnant women as an indicated use. … We have no records responsive to your requests.

And then, plaintiffs withdrew their flu vaccine lawsuit (pdf).

As with the previous case where ICAN alleged a revelation, this is an FOIA claim that led to disclosure. However, the strong language in which this was described is especially strange in this case, and the other claims in the article range from subtly misleading to clearly incorrect.

In terms of safety, the recommendation drew on retrospective studies (which are considered important on the hierarchy of biomedical research), not manufacturer clinical trials. So the lack of clinical trials is not surprising or a revelation. It was not the basis for the recommendation, either. There is no failure on the part of the FDA or CDC there.

Behind this claim is the apparent belief that only clinical trials can provide good evidence on a medical issue. If this were true, we would still not know that cigarettes cause cancer or insulin can treat diabetes, because that knowledge is not based on random clinical trials. Dr. David Gorski describes idolizing clinical trials this way as “methodolatry”, and points out that there are many situations in which for practical or ethical reasons we cannot have a random clinical trial – yet, we still have very good evidence, as in vaccines.

Whether sincerely, because of misunderstanding of clinical trials and scientific research, or whether because it serves their goal of attacking vaccines that prevent diseases, ICAN has repeatedly made this error.

In this specific case, when there is evidence that pregnant women are at high risk of influenza, and when there was prospective data showing influenza vaccines safe in pregnancy, a random clinical trial in which some pregnant women were intentionally denied vaccines to protect against influenza would be highly problematic ethically, because it would mean leaving them at risk of a disease that can kill or harm them when there is a proven preventive at hand. So that is not going to happen. Experts still recommended the vaccines, and as will be detailed below, there is extensive data behind that.

Other incorrect claims of the flu vaccine lawsuit

The article implies that the recommendation is illegal. It says:

The implication that this makes the recommendation illegal is problematic on several levels. First, it is not illegal to use something off-label, that is for non-approved indications. In fact, sometimes there are very good reasons to do just that.  In the context of vaccines, there are sometimes excellent reasons for the CDC to deviate from FDA labeling.

In this case, for example, the Centers for Disease Control and Prevention (CDC) deviates because influenza is dangerous for pregnant women (and newborns), and studies show that flu vaccines lead to positive outcomes for both the mom and the baby.

Of course, the CDC is not a company, it is a federal agency. 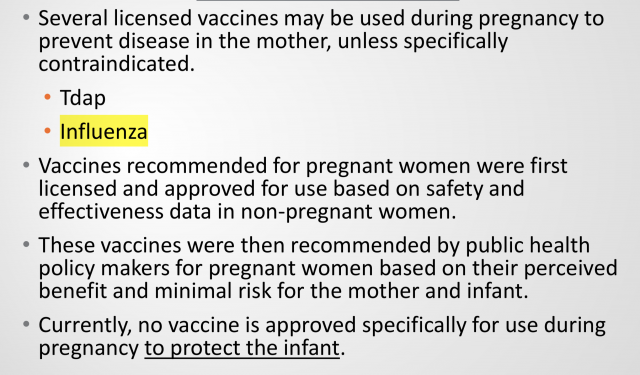 Note that the FDA agrees with the CDC’s recommendations. In a powerpoint on the topic, the FDA explains:

The article suggests a lack of safety studies of influenza vaccines in pregnancy. But there are many such studies, and they consistently find that flu vaccines do not cause miscarriages, and in fact, may improve pregnancy outcomes.

The article argues that a JAMA study found a risk of ASD from influenza vaccines – but that’s incorrect. The study concluded:

There was no association between maternal influenza infection anytime during pregnancy and increased ASD risk. There was a suggestion of increased ASD risk among children whose mothers received an influenza vaccination in their first trimester, but the association was not statistically significant after adjusting for multiple comparisons, indicating that the finding could be due to chance. These findings do not call for changes in vaccine policy or practice, but do suggest the need for additional studies on maternal influenza vaccination and autism.

The anti-vaccine article criticized the use of a statistical method to correct for multiple correlations, based on a letter from a statistician. Epidemiologist Dr. Rene Najera explained to me, upon my question, that the use was correct:

Suppose that you have a 5% chance of saying there is no association when there is one. But that’s comparing two groups. As you compare more groups, that 5% is multiplied by the other chances of making mistakes, and it is inflated.  So, when there was a 1 in 1000 chance of seeing the results you did by just chance alone, because you’ve made a lot of comparisons, your chance might go up to 1 in 100. (I’m exaggerating, but that’s the gist of it). You need to use a different cut-off for statistical significance for that reason, thus the Bonferroni correction.   It’s not that you’re increasing the risk of missing true associations. You’re increasing the risk of false associations with so many comparisons, so you change your tolerance to missing a true association in order to still have about a 5% chance of missing a true association when there is one.

(For further discussion of this study and the claims, see here.) Note that the research transparently showed both results – with and without the correction – and explained their conclusion. That is transparency at work.

Finally, the article warned that an immune response in pregnancy may be dangerous. But the studies this is based on showed that infections in pregnancy may cause harm to the unborn, not vaccines. As an argument against vaccines that prevent infection, it is, well, strange.

In short, this flu vaccine lawsuit showed nothing new – nobody claimed the recommendation was based on clinical trials – incorrectly represented the regulatory framework, and incorrectly described the data on flu vaccines safety. It is not any revelation and is not a good reason to leave mothers and babies at risk of influenza.