Well, it’s time to do what the old dinosaur always does – check out this new article that claims that fluoridated water lowers IQ.

Why do we have fluoridated water?

Water fluoridation is one of those public health successes (like vaccines) that has been controversial (like vaccines). In fact, back in the ancient world (the 1970s) when we all knew that vaccines protected kids from dangerous diseases, anytime a community wanted to fluoridate their water, nutjobs used the same ridiculous and ignorant arguments as the anti-vaccine religion to push their agenda against water fluoridation.

Just to back up a little, here’s some science about fluoridated water and teeth.

Fluoride is the naturally occurring inorganic anion of fluorine. It has one negative charge and is found in fairly large quantities in the form of calcium fluorite (CaF2), the most common form of fluoride. Even without fluoridation, many water supplies contain some amount of fluoride.

Fluoride has a very simple mechanistic effect on teeth (and dental caries). Fluoride operates on tooth surfaces by reducing the rate at which tooth enamel demineralizes and increases the rate at which it remineralizes in the early stages of dental caries. In other words, it reduces the damage to teeth from cavities, but it also can repair it, as long as it is done early enough.

Water fluoridation works by increasing, very slightly, the concentration of fluoride in the saliva, which constantly bathes the teeth in very low levels of fluoride. And by doing so, it reduces the risk of cavities, while also inducing some repair of the teeth. Please note that if a tooth has significant damage from a cavity, fluoride is probably not going to repair it.

The science behind the safety and effectiveness of fluoride is impressive. A strong systematic review (considered the pinnacle of the hierarchy of biomedical research) from Cochrane provides robust evidence that water fluoridation does reduce tooth decay in communities:

Another large systematic review published in Evidence-Based Dentistry summarized their findings as such:

Fluoridation of drinking water remains the most effective and socially equitable means of achieving community-wide exposure to the caries prevention effects of fluoride.

And in general, we have not really had robust, repeated evidence that establishes a link between water fluoridation and IQ effects.

The paper, by Christine Till Ph.D. of the Department of Psychology, York University, Toronto, was published in JAMA Pediatrics in August 2019. This Canadian study examined whether higher fluoride intake during pregnancy was associated with IQ scores in children.

The researchers looked at 512 mother-child pairs and found that each 1 mg/L increase in fluoride concentration maternal urine seemed to be linked with a decrease of 4.49 Full-Scale IQ points in boys, aged 3-4 years. The results were adjusted for demographic, quality-of-home, and some other important confounders.

On the other hand, higher maternal fluoride concentrations were not associated with lower IQ scores for girls of the same age – in fact, they found a slight increase in IQ of +2.43 points. Of course, that result was not statistically significant, but it’s a disparity that we’ll discuss later. However, the researchers did not speculate on the sex differences with regards to fluoride exposure.

There are studies all over the place about fluoride and IQ. A 2013 study in New Zealand showed that water fluoridation at the level found in the USA was not linked to IQ. And a 2012 study from China,  which I found to be poorly designed and analyzed by the researchers, seemed to find some negative neurodevelopmental issues, although it was at fluoride levels substantially higher than found in US drinking water.

In other words, we do not have broad scientific consensus on a link between water fluoridation and IQ. And this article has some troublesome aspects that need to be addressed.

My review of the article

Let’s take a look at several issues that bother me about this article.

To be fair, the authors made several suggestions on how to improve their study including devising better biomarkers for maternal fluoride along with fetal exposure.

So what does this study tell us about fluoridated water?

Firstly, the authors concluded that:

In this study, maternal exposure to higher levels of fluoride during pregnancy was associated with lower IQ scores in children aged 3 to 4 years. These findings indicate the possible need to reduce fluoride intake during pregnancy.

The findings of Green et al and others indicate that a dispassionate and tempered discussion of fluoride’s potential neurotoxicity is warranted, including consideration of what additional research is needed to reach more definitive conclusions about the implications, if any, for public health.

I think that’s way too strong conclusions from both papers, given the limitations of this study and the well-understood benefits of water fluoridation. However, this study may point to some neurological effect of fluoride. If these results are repeated in much larger, more robust, better controlled published studies in the future, then we would need to determine at which level of fluoride provides dental benefits but avoids neurological effects (you know, the critical “dose makes the poison” toxicology).

Although I am not one who thinks much of the precautionary principle, some pregnant women will use an abundance of caution to avoid fluoride. But that might be more difficult than one can imagine – toothpaste, most mouthwashes, and water contain fluoride.

About the only choice for a person to avoid fluoride would be to purchase fluoride-free bottled water (most filtration systems do not remove fluoride), don’t brush teeth with fluoride toothpaste and do not rinse with any fluoride-containing mouthwash. Even then, many foods contain some amount of fluoride.

If this happens, the rate of dental caries will skyrocket. And that’s not good for the public health of both children and adults. Although it is good for the income of every dentist, as they repair the teeth of children and their mothers with fillings and implants.

But back on topic – Dr. Bellinger also wrote:

Research on fluoride as a potential neurodevelopmental toxicant is still at an early stage, and compelling weight of evidence from high-quality epidemiological studies has not yet developed.

He’s right. We need to know whether this hypothesis is supported by better data because it is an important question.  If there is more and higher quality evidence supporting fluoride “neurotoxicity,” then we will require an intense, evidence-based discussion of the public health benefits and risks of water fluoridation. Decisions on fluoride use should not be based on gut reactions to one study that has some serious conclusion but with some serious flaws.

About those vaccine deniers?

You just know that the anti-vaxxers will jump on this story to “prove” that the CDC, along with every other public health agency, is wrong about fluoride, so they must be wrong about vaccines. And GMOs. And whatever else pops up on the Google Medical School education radar.

They will try to convince us that because we didn’t know about the dangers of fluoride, even though those dangers are far from substantiated, we probably don’t know all of the dangers of vaccines.

The difference in these two issues is simple – we do have large, repeated, published evidence that supports the safety and effectiveness of vaccines. It is settled science. If any vaccine deniers want to “unsettle” the science of vaccines, they ought to bring evidence, which they haven’t.

On the other hand, we do not have large, repeated, published evidence that either supports or contradicts the hypothesis that fluoridated water causes neurodevelopmental issues. We have a small observation in one country with a very non-diverse study group that could indicate an issue, but it is the farthest thing from settled science.

Of course, the discussions about vaccine benefits and risks are quite different from fluoridation since the benefits of vaccines are incredible (it’s not just teeth, but it’s about preventing deadly infectious diseases, although dental diseases are almost as serious) and the risks are extremely rare (less than 1 in a million vaccinations).

This article will also lead to vaccine chemophobia, the irrational fear of any chemical that comes within sight of a vaccine. Unless the chemical is blessed by mother nature to have been created for human betterment. Which means that there’s nothing, since every “natural” or “unnatural” chemical is the same, because there is no mother nature and because the evolution of “natural chemicals” doesn’t actually care about humans.

At any rate, this article about fluoridated water and IQ is a tiny study that could potentially show that there is an issue with fluoride. There should be a reasoned discussion about its safety once more evidence is provided by powerful scientific and clinical studies.

But when it comes to reasoned discussions and anti-vaxxers, that’s not been most of our experience.

What’s the over/under on when the first anti-vaxxer will claim that the CDC lied about tobacco, vaccines, AND fluoride? I’m guessing 2 days.

The anti-vaxxers jumped on this article within a day. Here’s a post in the radical anti-vaccine Facebook page “Hear this Well”: 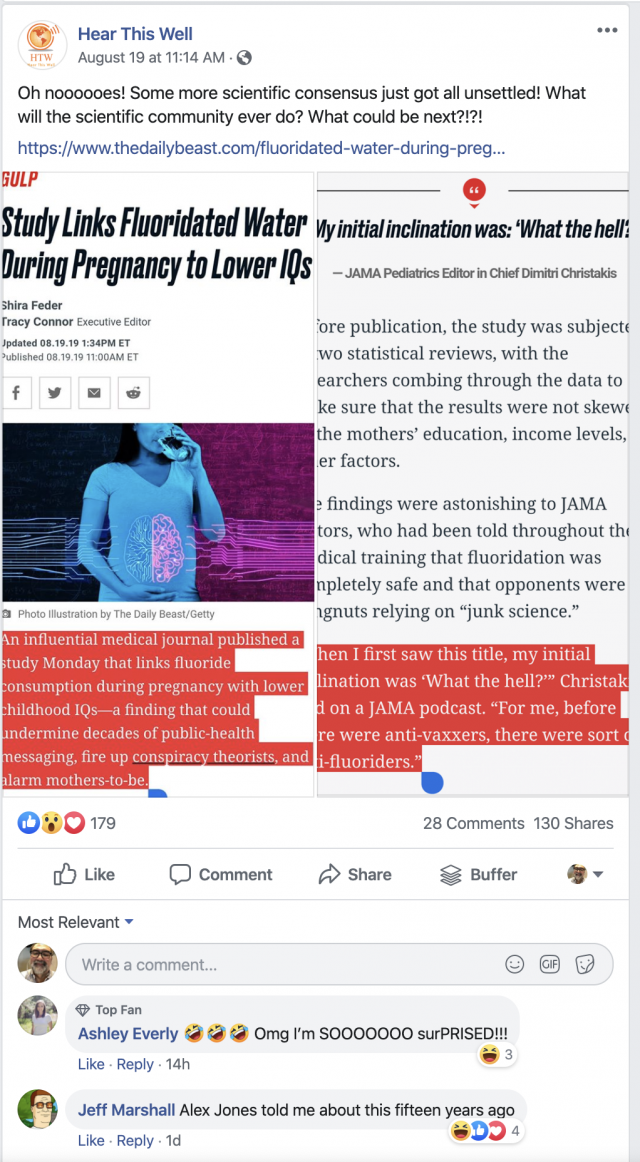 I’m sure there will be more of this type of nonsense circulating through the anti-vaccine religion soon.

Special thanks to Tara Haelle, whose Medscape article about this new study on fluoridated water made me wonder what the anti-vaxxers would do.