There are many food and nutritional fads floating around the internet that have limited scientific or medical evidence supporting their nutritional usefulness. One of them is the gluten-free diet that has become one of the most prevalent, and annoying, food crazes.

Of course, parents who buy into these fads often include their children. And it’s been the same for the gluten-free obsession. But are gluten-free foods “healthy” for children? Lucky for us, a new study has looked into it. And I am going to look into that study.

Gluten is a protein found in wheat, and similar proteins found common grains such as barley and rye. Generally, we like gluten, because it gives elasticity to dough, allowing bread and pizza crust to have that chewy texture that is an important component of the pleasure of eating.

Gluten is a critical component in may foods, everything from bagels to bread to cakes. Generally, kneading the dough forms long-chain gluten protein molecules which, as the chains get longer and longer, the texture becomes chewier and chewier. Pastas, breads, and so many other foods are made through high gluten flour that is worked hard to create longer chain proteins. I bet you didn’t know that good cooking requires a thorough grasp of basic biochemistry.

Gluten can be removed from the milled flour (or it can be added back). Purified gluten, because of its texture, is actually used to create fake meat products, so beloved (or not) by vegans.

So what is real gluten sensitivity?

The vast majority of individuals who claim that they are “sensitive” to gluten really aren’t. Of course, there are people who are sensitive to gluten – for these individuals, gluten must be avoided.

For example, celiac disease (also known as coeliac disease in British English) is an autoimmune disorder that afflicts the small intestine of certain individuals who are genetically predisposed to gluten sensitivity. The disease afflicts between 1 in 1,750 and 1 in 105 people in the United States (or about 0.05 to 1%), a tiny number. Celiac disease usually presents, but not always, with chronic diarrhea, low pediatric weight gain, and fatigue in response to gluten.

Although the disease is not completely understood, in a person with celiac disease who is exposed to gluten, the immune system causes an inflammatory reaction of the lining the small intestine. This interferes with the absorption of nutrients. The only known effective treatment is a lifelong gluten-free diet.

This disease should not be confused with a wheat allergy, which is caused by an immune reaction to wheat proteins, which may or may not include gluten. There are over 20 different wheat proteins that have identified as causing wheat allergies, and gluten generally is not the cause of this type of allergy. Moreover, wheat allergies are extremely rare, and the gluten form of wheat allergies is so rare that it would take a huge population to detect it.

Outside of celiac disease and wheat allergies, both of which can be diagnosed objectively through comprehensive medical tests, there is a large group (by some reports, over 100 million Americans) who claim that they have some mysterious gluten sensitivity, which has a real name, non-celiac gluten sensitivity. This has become a frustrating issue for restaurants who are getting ridiculous demands to remove gluten from their meals from those who claim to have some issue with gluten.

And cynical skeptics like me overhear someone say “I can have a little bit of gluten,” and know immediately that they really don’t have any serious gluten sensitivity since it’s an on/off situation. A little bit of gluten makes someone with celiac disease or a real gluten allergy very sick, very fast.

There is some research into this potentially real or mythical condition, and there might be some small (smaller than the numbers for celiac disease or wheat allergy) number of people with a previously unknown type of gluten sensitivity, but the evidence of this is very weak.

Humans have consumed cereal grains for hundreds of thousand years –modern human evolution would have selected against those with some heretofore unknown gluten sensitivity. For now, there is no robust evidence supporting a widespread gluten issue with most humans.

I want to make this clear, so I will italicize and bold what I will write because some readers don’t actually read this article, and claim that I think that gluten sensitivity does not exist. For a small proportion, around 1%, of the population who has celiac disease, avoiding gluten is a critical health issue. For the even rarer proportion who have allergies to gluten, avoiding gluten is a critical health issue.

Despite what I’ve written here, that a gluten-free diet is irrelevant except to a tiny percentage of humans, I am certain that a large number of you will ignore the evidence. Then insist that, based on your post hoc fallacy, anecdotes, or plain beliefs, gluten-free is the way to go for yourself and children.

A new paper, by Dr. Charlene Elliott of the University of Calgary, published in Pediatrics examined foods marketed for children that were labeled “gluten-free.” She compared the actual nutritional content of these foods to similar foods that were not labeled as such.

Junk foods, such as confectionary products (candy), potato chips, cheese-flavored snacks (like Cheetos), sugary sodas, and similar products, were excluded from this analysis. Dr. Elliott focused on products that specifically targeted children by meeting one of the following criteria:

I think that we all know what foods are targeted to children, but since this study was published in a high-ranked peer-reviewed journal, Pediatrics, Dr. Elliott was careful to lay out exactly what would be considered a gluten-free food targeted to children.

Dr. Elliott standardized nutritional content to 100g servings to make comparisons valid. She analyzed 374 food products that were targeted to children, 66 of which were labeled as gluten-free. 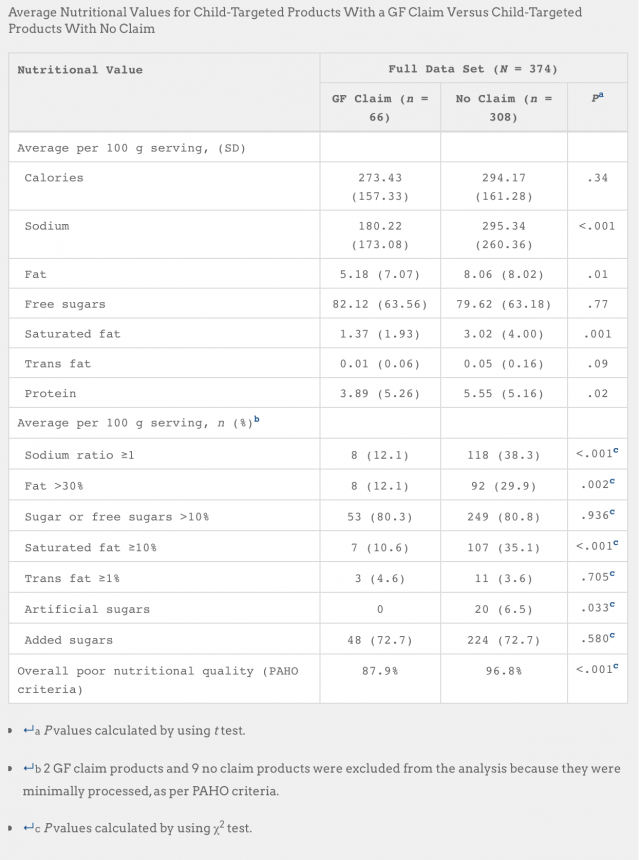 Despite the belief that gluten-free foods targeted to children are somehow nutritionally superior to those without that claim, it was clear that the foods were fairly similar. In fact, the results show that the overall nutritional content of gluten-free foods is equivalent to foods that weren’t labeled as such.

However, there were some interesting findings in this study. Although it was not statistically significant, the research found that gluten-free foods contained less protein. Since gluten is a protein, the lack of it could account for some of that difference. Protein contents of foods are often overlooked when examining food labels.

When these foods were compared utilizing the Pan American Health Organization Nutrient Profile Model (pdf), a guideline for packaged foods and diets for children, 88% of the packaged gluten-free foods targeted to children were classified as “unhealthy.” Of course, this compares to 97% of non-labeled foods. These pre-packaged foods for children are just not that great for nutrition, whether filled with gluten or not.

The results of this study have some far-reaching implications. Both children with or without gluten sensitivity may not be getting adequate nutrition from these gluten-free packaged foods.

Despite the claims that “gluten-free” foods are somehow healthier for children, these foods contained high levels of sugar, sodium and/or fat. There appears to be no nutritional advantage for these foods compared gluten-filled foods.

As the first study in which the nutritional quality of GF supermarket products targeted at children are examined, this research reveals that products with a GF claim are not nutritionally superior. This has implications for parents who seek healthy products for their children, especially in the case of children with CD (for whom gluten must be avoided), but also in the case of parents who mistakenly believe that GF products will confer health benefits. It is important to unsettle the assumption that GF food equals healthy, which has functioned as an excellent sales tool for the food industry but does little to support public health. Reminding parents and caregivers to read the nutrition facts table and to serve whole, unprocessed foods is 1 step in the right direction; so too is the development of a policy that allows consumers to easily assess the nutritional quality of packaged products (such as an easily understood, federally regulated front-of-pack symbol). This is particularly important in light of the finding that foods targeted at children in general (both GF and regular products) are of poor nutritional quality.

Parents who believe that gluten-free foods confer some superior health benefit are sadly mistaken. Unless the child actually has a medically diagnosed celiac disease or gluten allergy, these foods provide no real benefits to the child at the cost of lower nutritional value.

Sure, maybe children should be avoiding pre-packaged foods period. A lofty goal, but it’s not within the scope of this study.