While the proposal is likely to face criticism from both immunization opponents and those seeking stronger measures, the proposed Israel vaccine law has potential to improve immunization rates in Israel and may be a better fit for Israel’s situation than alternatives. It is clear that a lot of thought went into it. 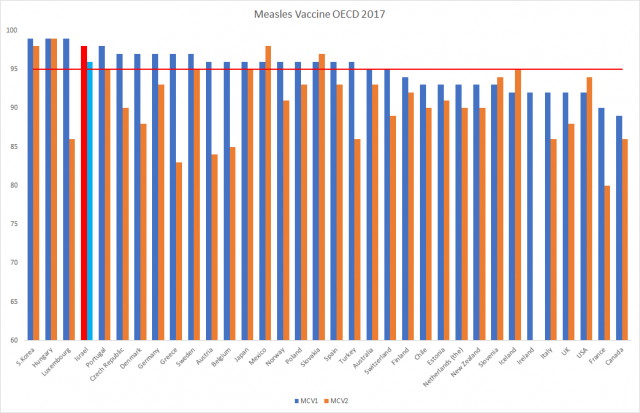 But as experience in other areas demonstrates, overall immunization rates are only part of the picture – local hotspots where vaccines rates are low can create a risk of an outbreak. This is what appears to happen in Israel –a growing measles outbreak, centered on pockets of non-vaccinating parents, created concern in the population.

In one case that made the headlines, an unvaccinated three-year-old exposed over 80 children, including those in a cancer ward (who are particularly susceptible), to measles.

The response included both a private initiative calling on kindergartens to refuse entry to unvaccinated children and a push for a new Israel vaccine law – including legislation that would make immunization a prerequisite for preschool.

During the week of August 27 to 31, two members of the Knesset, the Israeli Parliament – Yoel Hasson and Shuli Mualem – proposed a more moderate Israel vaccine law, supported by the Israeli nonprofit Mida’at, a small volunteer-based organization created to promote public health, among other things by supporting immunization. This post examines that proposal.

The bill opens with general provisions. Those enact a right for parents to immunize their children with routine vaccines and an obligation of the Ministry of Health to “publish current information about the routine vaccines, their safety, effectiveness, the diseases the vaccine prevents, and how to get vaccines, and answer questions on the topic.”

It states that parents whose children are not fully vaccinated by the age of two, or who miss a later vaccine, will receive a reminder of the need to vaccinate, how to get the vaccines, and the duty to sign a “refusal to vaccinate” declaration as an alternative to vaccinating.

The proposed Israel vaccine law does not stop with creating a registry – it requires the Ministry of Health to publish an annual report that includes vaccine rates by location and by the school, too. This is a helpful tool, allowing parents to know how their school is doing, and potentially allowing parents of medically vulnerable children to avoid low-rates schools (though it’s not easy in Israel if the parents are in a public school that has low rates and cannot afford private schools).

The real teeth of the bill, however, are in the next provisions. The proposed Israel vaccine law does not create a school or daycare mandate. In informal discussions with some of those involved in the bill they explained that given the existing high rates of immunization in Israel, they felt such a mandate was unjustified, and less coercive measures more appropriate. Instead of a mandate, the bill creates a number of other mechanisms directly aimed at dealing with the threat that non-vaccinating poses to others:

Parents who do not want to vaccinate will be required to sign a document setting out the refused vaccines, potential health implications from the refusal (basically, the risk of disease for the child and others), the reason of refusal, and understanding of the legal implications – the potential for the steps in the next sections.

Parents whose children have valid medical reasons not to vaccinate are not required to sign a declaration and not subject to the other provisions. However, although medical reasons can be based on a detailed letter from “an expert physician”, the Ministry of Health will have the authority to overturn a physician’s assessment and not accept the views of the child as medically exempt. By including this oversight of the medical exemptions, the proposed Israel law avoids a risk of abuse of medical exemptions to circumvent the law, a problem California, for example, is facing (see also here). Parents whose children are not medically exempt will, if unwilling to sign the “refusal to vaccinate” declaration, face a fine.

In other words, parents of unvaccinated children will pay more for health insurance for their family than parents whose children are fully vaccinated – not through the imposition of additional payment, but through the removal of an exemption. This mechanism parallels the Australian No Jab, No Pay, which removed an exemption that allowed non-vaccinating parents to obtain a monetary benefit, reserving the benefit to those who vaccinate (or who are medically exempt). The Australian scheme led to increasing vaccination rates, though it has been also subject to criticism.

The Israeli bill, however, is different in two important ways. First, by making the relevant payments health insurance payments, it more directly links the behavior to the costs it may impose. Non-vaccinating imposes costs on society because outbreaks are costly – they have direct health costs for the individuals involved which, in a system where health insurance is inclusive and broad, will be covered by everyone paying into the health insurance scheme – by the collective – and on the public health authorities working to constrain outbreaks.

Making non-vaccinating parents pay more for health costs makes them internalize the risks they impose on the system. Doing it by removing an exemption avoids setting a precedent for conditioning different health payments on health status: it’s not that their premiums are directly higher than other parents because of the additional health costs. But by not doing their share to reduce everyone’s costs – by not taking the simple precaution of vaccinating their children to reduce the risk of disease – they forfeit the right to a benefit.

Second, one concern about the Australian scheme is its regressive effects: poor families are less likely to be able to afford to forego the benefit, so the scheme is more coercive towards them than towards richer non-vaccinating parents. In Israel, the payment in question is relatively low, so the regressive effects are lesser, though they still exist. Of course, this creates the possibility that the payment – because it is low – will not act as a real deterrence and be less effective than the Australian one. On the other hand, by forcing non-vaccinating parents to internalize at least some of the cost they impose on society, it is fair.

Authority to exclude unvaccinated children from school during an outbreak exists in all United States states, but the Israeli bill goes further in several ways:

While the proposed Israel vaccine law does not create a mandate – going less far than other proposals raised in Israel itself, or the choices made by Italy, France, California etc. – it creates real incentives to increase vaccination rates and includes important and innovative procedures – like the ability to close schools or remove students from schools with low rates – those other systems could learn from.

It is clear that the writers of the proposed law tried hard to respect personal autonomy while crafting meaningful steps towards increasing immunization rates. Whether it will pass is unknown yet – it will certainly face strong hostility from committed anti-vaccine groups, though its moderation may help limit opposition among parents without strong opposition to vaccines.

And with the legislative process, you know where you go in, you never know where you come out. The proposed mechanisms have, however, a chance at improving rates, and it would be extremely interesting to see its operation in practice if it does pass.