If you have been following the detritus of the internet regarding COVID-19, you have probably seen a video called “Plandemic” from Judy Mikovits, another pseudoscientist screaming about conspiracies and nonsense during this pandemic. She has a long history of scams and false information over a few decades, not unlike all of the other false authorities we’ve seen over the years.

In case you don’t know about a “false authority,” formally the “argument from false authority” logical fallacy, which favors claims from individuals based solely on their credentials rather than the scientific consensus. Credentials don’t matter – I maybe someone who has a Ph.D. in cell biology and biochemistry from a top university, but if I claim that you must believe that Sasquatch because of my background, that doesn’t work. Plus, Sasquatch does not exist.

The anti-vaccine zealots have a long history of relying upon false authorities – Tetyana Obukhanych, Christopher Exley, and Christopher Shaw. None of the individuals have any reputation in vaccines, yet they are deified by the anti-vaxxers. I’m guessing that Judy Mikovits will be joining that crowd soon. 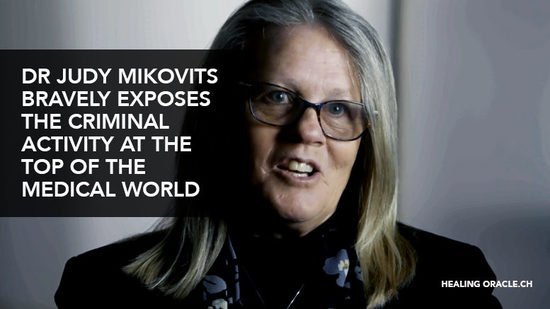 All about Judy Mikovits

Mikovits earned a BA degree in chemistry from the University of Virginia in 1980. She worked for a defunct pharmaceutical company for a few years as a laboratory technician before leaving the company because of some dispute. She continued her illustrious career as a lab tech at the National Cancer Institute (NCI) while earning a Ph.D. in biochemistry from George Washington University.

Her Ph.D. thesis was titled “Negative Regulation of HIV Expression in Monocytes,” according to a report in Science. Mikovits has claimed that she worked as a postdoctoral researcher from 1993 to 1994, and was eventually employed as a scientist at the Laboratory of Leukocyte Biology at the NCI.

In May 2001, Mikovits left the NIC to work at a failed start-up drug-discovery company in Santa Barbara, CA, EpiGenX Biosciences. Nothing is known about her employment there.

By 2005, Judy Mikovits was working as a bartender at the Pierpont Bay Yacht Club in Ventura, CA.

As false authorities go, this is not exactly someone with sterling credentials in any field that would be relevant to anything to do with vaccines or COVID-19.

At this point in the story, Mikovits made her move to some sort of notoriety in science, and none of it was good.

By 2009 (the exact date isn’t clear), through a contact she made as a bartender, she was appointed the research director at the Whittemore Peterson Institute (WPI), a privately-funded research center located in Reno, NV that focuses on neuroimmune diseases, such as chronic fatigue syndrome (CFS). CFS is a highly controversial diagnosis with no consensus on its causes, pathophysiology, or treatments. However, it has large and loud advocates, not unlike chronic Lyme disease filled with fake treatments and claims.

It’s unclear why her credentials would mean anything to WPI, given the fact that she had no background in these diseases.

According to a 2009  New York Times article, we get more details at how she went from a bartender to WPI.:

Rather than just doling out money to far-flung researchers, the Whittemores wanted to employ their own scientists who would be devoted full time to the cause. In the spring of 2006, they met Dr. Judy A. Mikovits, a virus expert who had spent 22 years (editor’s note: that’s inflating her background a lot, she was not a published virus expert and she spent less than 7 years as an act) working at the National Cancer Institute.

She had left the institute in 2001 to get married and move to California, where she went to work for a drug development company that failed. She was tending bar at a yacht club when a patron said her constant talk about viruses reminded him of someone he knew in Nevada. That person was a friend of Annette Whittemore’s. Dr. Mikovits soon found herself at a conference on chronic fatigue syndrome.

In 2009 she co-authored a paper in Science that claimed that an obscure virus called xenotropic murine leukemia virus-related virus (XMRV) was linked to CFS. The study caused optimism in the CFS advocacy community that anti-retroviral drugs could be used to treat the disease. And the paper caused concerns that XMRV could be spread through the blood supply.

However, the study was roundly criticized by scientists, and several studies were published that could not replicate Mikovits’ claims.

The paper was fully retracted by Science in 2011. In fact, Mikovits refused to sign the retraction notice. 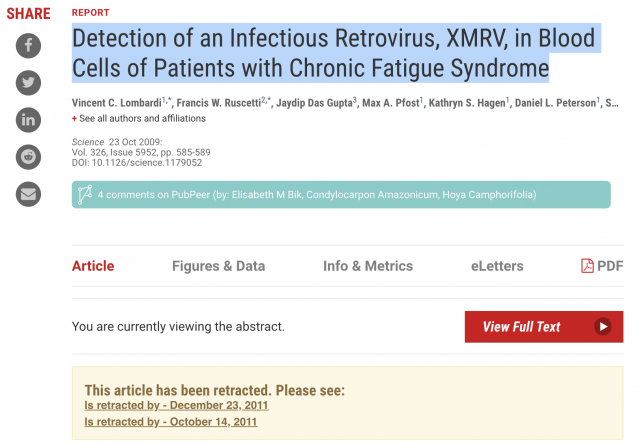 Ironically, Judy Mikovits participated in another study which she claimed would be the “definitive answer” regarding XMRV and CFS. The well-designed and robust study looked for XMRV in blinded blood samples from around 300 people, half of whom had CFS. The researchers found that none had XMRV.

Soon thereafter, Mikovits’ relationship with WPI deteriorated to the point where her relationship with the institute ended. WPI filed a lawsuit against Mikovits in November 2011 for allegedly removing laboratory notebooks and keeping other protected information on her laptop, flash drives, and a personal email account.

The Science news department reported that she was “arrested in California on felony charges that she was a fugitive from justice and jailed for several days.” However, Nevada prosecutors dropped the criminal charges against her in June 2012. Since then, this false authority has not published anything in the scientific literature since that 2012 paper that thoroughly debunked her claims about XMRV and CFS.

As an expert in making false links between something and something, she, of course, had to provide her opinions on vaccines and autism, which have been shown over and over and over to not be related.  She claimed that:

Dr. Judy Mikovits will explain complicated details of how retroviruses in today’s biological therapeutics, including vaccines, are contributing to autoimmune disease, neuroimmune disease, and cancer, chronic inflammatory diseases that have been skyrocketing in incidence in the past quarter century. Dr. Mikovits has spent her adult life studying how retroviruses contribute to these diseases. Many factors are important in the development of diseases associated with retroviruses, such as the expression and mode of transmission being key to disease development. Dr. Mikovits has learned a great deal about the types of diseases from approximately 40 years of study.

I think “40 years of study” is a bit of overkill since 15 of it was spent as a lab tech. And it wasn’t until 2009 that she pushed that retracted study linking XMRV to CFS.

Finally, Mikovits has actually been called as an “expert witness” in a vaccine court case, in which the claimant was trying to show that alleged harmful contamination by animal retroviruses, EBV (Epstein-Barr Virus) and SV40 caused a form of cancer.

The NVICP Special Master found that they provided no plausible theory of causation.

Judy Mikovits is not an authority on COVID-19

Out of nowhere, Judy Mikovits publishes a video on YouTube that pushes many of the conspiracies that have circulated around the COVID-19 pandemic. I generally try not to link to this type of pseudoscience, but I don’t have to waste my time – YouTube and Facebook are pulling down the video as quickly as they can.

Anyway, many others have debunked almost everything in the video. Liz Ditz, whom I “met” while refuting some stupidity about autism disability in an LA Times comment section years ago, is keeping track of all of the anti-Plandemic articles that she can find.

Although all of the articles are good, the snarkalicious Orac’s takedown has some choice words for Mikovits:

Judy Mikovits is a disgraced scientist who claimed a retrovirus caused chronic fatigue syndrome, results later soundly refuted. She went antivaccine for a while but has now been reborn as a COVID-19 grifter.

Actually, that was just after his headline, so you could almost stop there. But, there so much more for Orac to say:

I do love that last paragraph, though. It is exactly why people are prone to conspiracy theories. A good conspiracy theory turns the believer into a hero, a warrior with secret knowledge that none of the other ignorant “sheeple” know, against powerful forces arrayed against him. A good conspiracy theory almost always has a part at the end in which the “people” (in this case, the people believing the conspiracy theory) “wake up” and see what is being “suppressed” by the powerful forces seeking to keep them ignorant. Conspiracy theories like this both make the believer feel special and brave for having secret knowledge and fighting to make it public, but also provide an explanation for bad things happening in the world. Yes, the conspiracy theory in Plandemic is utterly ridiculous to those of us who know science, medicine, and history, but most people don’t know the relevant science, medicine, and history. To them, it sounds plausible.

The other reason I don’t really want to spend much time on this ridiculous fraudumentary is that once I read all of the critiques, I had no further need to watch it. It’s just more of that right-wing, science-denying nonsense that we keep seeing over and over with regards to vaccines and COVID-19.

She even claims that Dr. Anthony Fauci, who has been the breath of sanity in the Trump administration with regards to this pandemic, somehow sabotaged her XMRV research. Like he would even be thinking about a former lab tech.

Judy Mikovits is just another false authority, charlatan, and grifter who is trying to make a name for themselves during this pandemic. Mostly we should ignore them, but unfortunately, their false claims can cause harm, so we need to show the world who they are.

And Judy Mikovits has nothing useful to say about COVID-19.