Over the past couple of decades, we have seen a rise in contentiousness with respect to vaccination policy across various countries. May of these anti-vaccine parents are convinced that vaccines can lead to autism, despite the overwhelming scientific consensus that debunks that claim. This has even led to pet owners refusing to vaccinate their dogs because they think that dogs will get autism – they can’t. These parents often claim to know more than scientific and medical experts – and we often accuse these people of being afflicted by the “Dunning-Kruger effect.”

Despite the consistent, robust, and overwhelming evidence presented by the scientific community about the safety and effectiveness of vaccines, the epidemic of the Dunning-Kruger effect has overwhelmed the anti-vaccine religion. To be fair, this is not an issue just with the anti-vaccine world – many of us observe this form of science denial in anthropogenic climate change, evolution, GMOs, and many other areas of well-established science.

Let’s take a look at the Dunning-Kruger effect and some research that shows us just how prevalent it is among the anti-vaccine zealots.

What is the Dunning-Kruger effect?

The fool doth think he is wise, but the wise man knows himself to be a fool.

The Dunning-Kruger effect was first described by Cornell University social psychologists David Dunning and Justin Kruger. They stated that the effect was a cognitive bias of illusory superiority resulting from an internal illusion in people of low ability to recognize their lack of ability. Without this self-awareness, these low-ability people cannot objectively evaluate their actual level of competence or incompetence. To quote Dunning and Kruger, “the miscalibration of the incompetent stems from an error about the self.”

The Dunning-Kruger effect is often visualized by this graphic (or many like it): 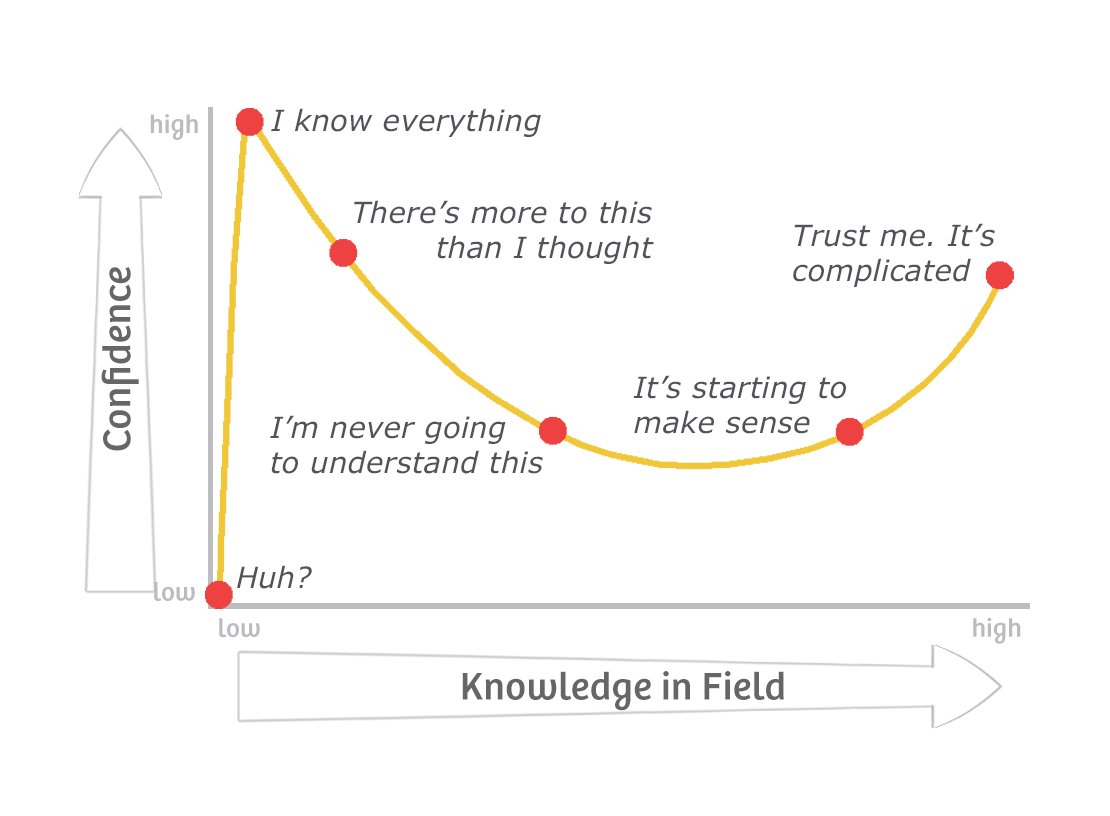 The effect can be summarized by the well-known phrase, “a little knowledge is a dangerous thing.” That is, a small amount of expertise or knowledge can mislead a person into thinking that they’re an expert because it is often easy to get a small amount of knowledge. They think that it’s all it takes.

They also think that those that have actual superior knowledge and experience are only marginally different than themselves. They underrate or even dismiss, the amount of work and effort it takes to be an expert in a field of biomedical science. I’ve often made this comparison – someone who has a college degree in art history is very well educated, but it’s arrogant of them to think they can grasp all the fields of biology that contribute to the knowledge of someone who is an expert in immunology, public health, epidemiology, or a large number of other areas that are important to understanding vaccines. Just as much as I couldn’t become the world’s leading expert in appraising impressionist art. Note that I have never written anything about impressionist art.

Some of us believe that the internet has contributed to this epidemic of Dunning-Kruger effect. The “University of Google” degree, which generally takes a couple of hours to obtain, is considered by those with this effect to be equivalent to or superior to the vast education and experience of those who really did study highly specialized field of biomedical science. They tend to vastly underrate the education, experience, and knowledge of those who do real research while vastly overrating the University of Google knowledge.

It is frustrating for those of us who value both the quantity and quality of evidence that supports the safety and effectiveness of vaccines (and many other sciences).

The Dunning-Kruger effect study on the anti-vaccine world

Those who think they know never learn.

—from the Tao Te Ching

In an article by Matthew Motta, Timothy Callaghan, and Steven Sylvester, published in Social Science & Medicine, asked a simple question – could the inability of the anti-vaccine community to accurately gauge their own knowledge, experience, and skills compared to those of actual vaccine experts play a role in sculpting their own beliefs about those vaccines? In other words, does the Dunning-Kruger effect give the anti-vaxxers an overconfidence about their knowledge of vaccines and then cloud their perceptions of the vaccines, while dismissing the scientific consensus.

To test their hypothesis, Motta, Callaghan, and Sylvester asked more than 1300 Americans, in December 2017, to compare their perceived levels of knowledge about vaccines and autism to those of biomedical researchers and medical doctors. After that initial question, the researchers then asked a serious of questions about factual knowledge of autism, along with the extent to which they agreed or disagreed with the misinformation about the refuted link between vaccines and autism.

Motta, Callaghan, and Sylvester writing in an accompanying discussion of their paper in The Conversation concluded that:

Ultimately, our results point to the uphill battle that the scientific community faces as it confronts growing anti-vax sentiment from the public and politicians alike. Even as the mountain of evidence on the safety and importance of vaccines from doctors and scientists continues to grow, many Americans think they know more than the experts trying to correct their misperceptions.

Therefore, finding new ways to present scientific consensus on vaccines to an audience skeptical of medical experts should be a priority. Our research suggests that one interesting area for future research could be to examine whether pro-vaccine information from non-expert sources like celebrities could persuade those with anti-vaccine policy attitudes to change their minds.

The wise Orac summed up his own review of this article (see Note 1):

Unfortunately, these attitudes seem to be prevalent about more than just vaccines and autism. Trust in nonexperts and distrust of experts seems to be a feature of the age we are living in, fed by the ease with which everyone can be an expert on social media and the proliferation of “fake news.” Countering the assaults on science and reason resulting from humans in the thrall of the Dunning-Kruger effect is the central challenge of this age.

The “assaults on science” by those consumed by the Dunning-Kruger effect crosses political lines – as much as I see right-wingers deny climate change, I see liberals embrace anti-vaccine and pseudo-medicine. Both sides, on many scientific facts, deny science based on their own overconfidence in their abilities compared to actual scientists.

I don’t know when the USA (and many other countries) began turning against scientists and education. After Jonas Salk invented the polio vaccine, he was treated like an American hero. He would go to a restaurant and get a standing ovation – I’m pretty sure he never paid for a meal for decades. He was probably better known than politicians or movie stars of that era.

When I write here, I don’t claim to be an expert in anything but a few, very narrow fields of biomedical science. That’s why I rely on evidence exclusively – I give weight to the quantity and quality of published, peer-reviewed data. I try not to cherry-pick that data, I try to look at it all, though I am strongly biased toward systematic reviews, the platinum standard of published research.

I don’t know how or when we can reverse this anti-science trend that is prevalent across the political spectrum. This tendency to by individuals to be overconfident in their expertise in biomedical science is damaging to public health, especially stopping vaccine-preventable diseases with vaccines.

Of course, someone will surely state that I am the one with the Dunning-Kruger effect with a dose of Big Pharma shill dollars.