Let’s take a look at how this happened, and place blame right where it belongs – in the misinformation, pseudoscience, and outright lies of the anti-vaccine religion.

Measles, also known as rubeola (and not to be confused with rubella) is an infectious disease caused by the measles virus. It is extremely contagious, easily passing from one individual to another.

Despite the claims of the anti-vaxxers and anecdotes from adults, the disease is dangerous. According to the CDC, the complications from measles can be mild, such as diarrhea. However, more serious complications include:

Furthermore, measles can suppress the immune systems for months, and this can contribute to chronic bacterial infections like otitis media and bacterial pneumonia.

Measles is not a trivial disease despite the ridiculous claims of the anti-vaxxers – it can cause serious long-term neurological damage and death. And it all can be prevented with a simple vaccine. 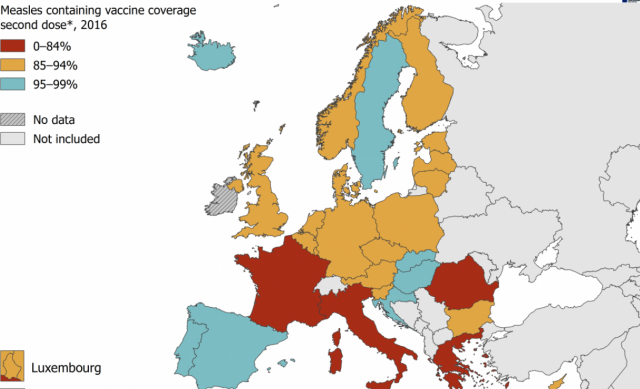 Placing the blame for this measles epidemic

Up until 1998, the MMR vaccine was uncontroversial. It was considered a critical part of our children’s health, reducing the risk of a dangerous and, often deadly, disease.

Then that cunning fraud, Andrew Wakefield, published his fraudulent and ultimately retracted study that falsely claimed a connection between the MMR vaccine and autism spectrum disorder (ASD). Despite Wakefield’s own malfeasance, he had serious competing financial conflicts of interests while involved with his fraudulent research, the autism myth remains.

Let me be blunt again. Robust scientific evidence has established that the MMR vaccine, or any vaccine, is not linked to autism. Period. Full stop. End of story.

The lack of a link between vaccines and ASD is settled science. This has been established by systematic and meta-reviews, clinical trials, and huge cohort and case-control epidemiological studies. This lack of a link is represented by an overwhelming scientific consensus.

Although Wakefield’s research has been thoroughly and repeatedly discredited by hundreds of peer-reviewed articles, he continues to push the myth. As a result of his own self-promotion, such as the fraudumentary Vaxxed, and his continued misinformation broadcast all over the internet, parents are frequently triggered by the worry that the MMR vaccine causes autism. And this has led to lower vaccine uptake in some areas.

But there are other fools who have put children of the world at risk of serious harm, including death, by pushing misinformation and dangerous lies to parents trying to find reasonable information about vaccines.

There’s Ginger Taylor, who pushes pseudoscience and cherry-picked nonsense to claim that vaccines do harm. There’s Del Bigtree, producer of the Vaxxed fraudumentary, who is clueless about vaccines. Then there’s Robert F Kennedy, Jr who lacks any credibility regarding vaccines, while worming himself into Donald Trump’s favor in trying to create a “vaccine safety commission.” There are the multi-retracted “researchers,” like Shaw and Tomljenovic, who publish bad science in bad journals trying to link vaccines to anything. All of these people should be held culpable for the European measles epidemic.

Of course, I could spend 10,000 more words listing out all the fools in the anti-vaccine religion that push lies that lead to deaths of children. But to save time, we’ve created a list of science-denying mouthpieces of the anti-vaxxers.

Despite the fabrications and distortions of the anti-vaccine gang, let’s be clear about the safety of the MMR vaccine:

In other words, the risk of lifetime harm or death from measles is 1,000-10,000 times higher than from the MMR vaccine. That is simple math that the loudmouthed vaccine-denying crackpots seem to miss.

Let’s review the facts about this European measles epidemic

There has been a huge outbreak of measles in Europe during the first half of this year. This included the deaths of 37 children, teens, and adults along with unknown numbers of children with permanent, disabling neurological damage.

Every single one of those cases of measles and every single death could have been prevented by the extremely safe and effective MMR vaccine.

There is simply no robust and viable evidence supporting the belief that vaccines are related to autism. It is foolish and dangerous to put children in harm’s way because of ignorance and science denial.

Why would any parent put their children at risk of death from measles by avoiding the MMR vaccine? It doesn’t make any sense.