One of the things that the anti-vaccine zealots hate is a science-based vaccine forum. They cannot tolerate accurate and unbiased information being disseminated about the settled science of vaccine safety and effectiveness. Rather than have accurate facts being presented to parents, they would much rather do their best to suppress this information to make their cult of lies seem more impressive.

On 15 August 2019, Loma Linda University Humanities Program, part of the school’s College of Religion, was going to host a program, The Vaccine Mandate – Faith, Liberty, and the Pursuit of the Common Good. The two participants were Professor Dorit Rubinstein Reiss, Professor of Law at the University of California Hastings College of the Law, who is a frequent contributor to this and many other blogs, and Assistant Professor Wonha Kim, MD, who is the Director, Institute for Health Policy and Leadership at Loma Linda. 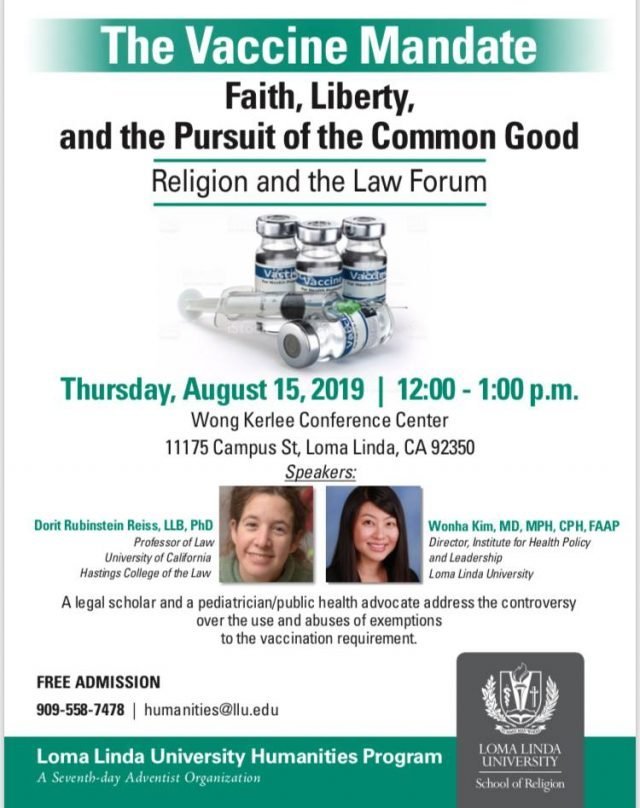 As the title of the program suggests, this vaccine forum was to be a discussion of vaccine mandates, exemptions, and related issues. I had planned to drive from my home to attend the lecture since I thought it would be both interesting and enlightening.

Unfortunately, for safety issues, mostly in the form of “protests” from the science-denying anti-vaxxers, Loma Linda University decided to postpone this important forum until a later date. With the mass murders of people in El Paso and Dayton, at roughly the same time, I’m sure that the university was worried about the somewhat violent tendencies of the anti-vaccine nutjobs played a significant role in the decision process.

I was genuinely worried about violence from the anti-vaxxers towards Professors Reiss and Kim. And against those in the audience who are strongly pro-vaccine, myself included. Although California does have strong anti-gun laws, that doesn’t mean some crackpot from another state could carry a weapon here to do harm to those of us who speak about science. We live amongst some awful human beings who place little value on human life – why else would they want little children to be a risk of horrible vaccine-preventable diseases.

There are literally dozens of Facebook posts from anti-vaxxers who have threatened harm towards Professor Reiss, Dr. Paul Offit, Dr. David Gorski, and many others that have put themselves at the forefront of supporting the science behind vaccine facts. These anti-vaxxers, who have nothing but fear, uncertainty, and doubt to support their pseudoscience need to resort to violent metaphors and hatred, just to make sure others support their cult of bovine fecal material.

If they had real scientific evidence supporting their claims, they would, of course, engage in civil discourse. Well, if they were actually capable of understanding those words.

An open vaccine forum, like this one at Loma Linda University, would have provided important information to parents so that they understand why mandatory (not really mandatory) vaccinations are critical to the well-being of not only their own children but all of the children in their communities. Sadly, the anti-vaccine religion cannot abide by accurate information, because it negates their lies.

I am hoping that Loma Linda decides to bring back Professors Reiss and Kim to lead this vaccine forum in a safe manner sometime soon. And I will, once again, ride by horseback from my isolated cabin, where I observe Sasquatch, to attend the discussion. Because I like fact-based information, as opposed to the anti-vaccine, pseudoscience-loving, hate-filled, pro-disease, bogans that make up the anti-vaccine mob.