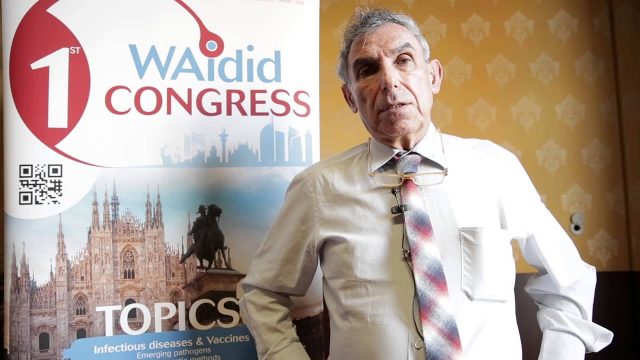 In a 6 November 2019 article in Science, Kai Kupferschmidt carefully examined the background of Yehuda Shoenfeld, coming to the conclusion that he is nothing more than an anti-vaccine propagandist.

Shoenfeld has long espoused theories popular among antivaccine advocates and spoken at their meetings, causing tensions with the Israeli medical community. The issue came to a boil in September, when Shoenfeld decided to publish a positive review of an anonymous antivaccine book in Harefuah, IMA’s Hebrew-language journal. The two reviewers, who did not have a medical background, wrote that the book “raises a strong suspicion that key aspects of vaccine safety have not been properly tested.”

The response was swift. Shmuel Rishpon, chair of Israel’s Advisory Committee on Infectious Diseases and Immunization, resigned as editor of Harefuah. Israel’s Association of Public Health Physicians called for an investigation and Shoenfeld’s resignation as editor-in-chief. The association is considering calling on authors and reviewers to boycott Harefuah, its chairman, Hagai Levine, tells Science.

Of course, Shoenfeld turns to the well-worn victim/conspiracy argument in response to the criticism:

If you write something about vaccines which doesn’t say that everything is OK … all the vultures are jumping on the one who writes it.

I guess we’re a vulture. I mean birds are a clade of dinosaurs, but I prefer raptor. So, I’m ok being included with a committee of vultures (see Note 1).

Kupferschmidt then proceeded to illustrate how far Shoenfeld has gone off the rails on vaccines.

But ASIA is ill-defined, says pediatrician Paul Offit of the Children’s Hospital of Philadelphia in Pennsylvania. Symptoms are said to appear up to 2 decades after exposure to an adjuvant and include anything from dry mouth to memory loss. Nor do epidemiological studies support the idea, Offit says. A 2012 study analyzed data from more than 18,000 people who were given a high amount of aluminum under the skin, as part of an immunotherapy against allergies; as researchers pointed out in a 2017 paper, they had a lower rate of autoimmune disease than controls. “Shoenfeld continues to push this frankly ill-conceived and arguably disproven notion despite the evidence,” Offit says.

A 2016 study by Shoenfeld claimed to show abnormal behavior, caused by ASIA, in mice given the human papillomavirus vaccine or an aluminum adjuvant. The study was published in Vaccine, but later withdrawn. “Review by the Editor-in-Chief and evaluation by outside experts confirmed that the methodology is seriously flawed, and the claims that the article makes are unjustified,” a note on Vaccine’s website states. The paper was republished a few months later under almost the exact same title in Immunologic Research, where Shoenfeld is on the editorial board.

A high-quality journal, like Vaccine, retracted his article because it was seriously flawed. And I cannot begin to state the laughter that ensued after Shoenfeld took his junk science article to a journal for which he is an editor. Talk about conflict of interest.

In their review in Harefuah, the authors write that the anonymous book suggests vaccines’ benefits are exaggerated while health agencies “ignore the possible link between chronic diseases and vaccines.” Shoenfeld says immunologists declined to review the book, but the authors he selected, both criminologists, were “very knowledgeable on vaccines.” (The authors themselves say in the review that “we had no prior knowledge of the subject of vaccines and their safety.”) The letter by the Association of Public Health Physicians says Shoenfeld “acted unethically” by not consulting Rishpon or other editorial board members with relevant expertise and calls his behavior “reminiscent” of that of disgraced antivaccine doctor Andrew Wakefield.

Shoenfeld has spoken at several such conferences, however; in May, he was one of three “featured speakers” at the AutismOne conference in Rosemont, Illinois, a major gathering of people who believe vaccines cause autism. (Wakefield gave a talk as well.) Shoenfeld also served on the scientific advisory board of the Children’s Medical Safety Research Institute, an international antivaccine charity.

Shoenfeld also regularly appears as an expert witness for people claiming injury from a vaccine. Court records show that this year alone, he has claimed more than $46,000 in fees for testifying at the Office of Special Masters of the U.S. Court of Federal Claims, which adjudicates vaccine claims. Under U.S. law, plaintiffs must present a theory that explains how their symptoms are caused by a vaccine; Shoenfeld argues ASIA fits the bill.

I know that the anti-vaxxers love to call me, and many others, “Big Pharma shills,” a laughably useless logical fallacy. Well, turnabout is fair play, and we can only conclude that there is a lot of money playing the anti-vaccine card. Wait, given how much I know about vaccines, maybe I should get some fees for testifying. Never mind, I’m sure I’ll be receiving my Big Pharma Shill Bucks™ soon enough.

Of course, Shoenfeld’s beliefs aren’t carrying much weight with the NVICP. Kupferschmidt agrees:

The courts, so far, have rejected the theory. In a recent case, the judge found that ASIA “is not generally accepted in the medical community and its diagnostic criteria do not differentiate between healthy and ill people.” In another case, cross-examination suggested “biases” as well as “apparent misrepresentations” on Shoenfeld’s CV, according to the court. Although the judge did not find Shoenfeld unqualified to testify, he concluded that his “combative response to this questioning, coupled with outright evasiveness in responding to certain questions regarding his background, did reduce his overall credibility as a truthful witness.”

The article concludes with a quote from Professor Dorit Rubinstein Reiss, a frequent contributor to this blog:

His elevated position means Shoenfeld “has the potential to cause a lot of harm,” says Dorit Reiss, a law professor at the University of California’s Hastings College of the Law in San Francisco who works on legal issues around immunization and wrote a lengthy blog post about the case last month. “He’s well-connected and influential.”

But that doesn’t mean he has any scientific evidence supporting his claims. Because there aren’t.

Kai Kupferschmidt lays out a powerful and robust case that Yehuda Shoenfeld, despite his claims, is pushing an anti-vaccine agenda. Moreover, it is clear that most of Shoenfeld’s claims are not supported by real science.

Many of us have been saying this for years. However, it’s great that a prestigious journal like Science is saying the same thing.