The old Skeptical Raptor took a bit of a break to recharge their batteries to tackle all of the pseudoscience that will be coming out in 2020. In lieu of new content, I will be republishing the top 10 most read articles on this blog during 2019. Here’s number 1 – the queen of the false authority of the anti-vaxxers – Tetyana Obukhanych.

One of their favorite pseudoscientists of the anti-vaccine religion is Tetyana Obukhanych, someone who appears to have great credentials. Unfortunately, once you dig below the surface of her claims, there is no credible evidence in support.

One of the most irritating problems I have with the anti-vaccine movement is their over-reliance on false authorities – they overrate publications (often in worthless predatory journals) or commentary from someone who appears to have all of the credentials to be a part of the discussion on vaccines, but really isn’t close to being a real vaccine scientist.

For example, Christopher Shaw and Lucija Tomljenovic, two researchers in the Department of Ophthalmology at the University of British Columbia, have, for all intents and purposes, sterling credentials in medicine and science. However, they publish nonsense research (usually filled with the weakest of epidemiology trying to show a population-level correlation between vaccines and adverse events) in low ranked scientific journals.

Following in the footsteps of Shaw, Tomljenovic, James Lyons-Weiler, and Christopher Exley, let’s take a look at the background and education of the anti-vaccine hero, Tetyana Obukhanych. END_OF_DOCUMENT_TOKEN_TO_BE_REPLACED

A new poll from the LA Times and conducted by the UC Berkeley Institute of Governmental Studies shows that Californians support vaccine laws. These laws mandate vaccines for students entering public or private schools while restricting the ability of some physicians to abuse the medical exemptions allowed in the original 2015 California bill, SB277.

During summer 2019, two new laws, SB276 and SB714, which restrict abuse of medical exemptions through a loophole in the original 2015 bill, were passed by the California legislature and signed into law by Governor Gavin Newsom.

According to the new laws, in 2020, the state will review medical exemptions by physicians who have written five or more medical waivers and at schools with a vaccination rate below 95%. In a compromise between the Governor and legislature, the new laws say that the state can only reject medical exemptions issued after 31 December 2019, unless that physician has been disciplined by the Medical Board of California.

In addition, all medical exemptions written by these physicians who have been disciplined can be invalidated.

As expected, the anti-vaccine zealots showed their nasty side by pushing violence against Dr. Richard Pan, odd racist metaphors, and all-around weird behavior. Because of their loud voices, you’d think that they were the majority opinion.

Over the past week, I have observed how dangerous vaccine deniers have exhibited hatred to everyone and everything that supports vaccination. And despite their demented claims, it is settled science that vaccines are very safe and very effective.

First, soon after California Governor Gavin Newsom signed two bills, SB276 and SB714 which were led by Dr. Richard Pan through the legislature, the anti-vaccine activists went off the proverbial deep-end.

Then, Prof. Dorit Rubinstein Reiss wrote a heartfelt, logical, and thoughtful article about the death of Evee Gayle Clobes, probably as a result of improper co-sleeping arrangements, and not from vaccines, as the mother and anti-vaccine zealots claim. The personal attacks on Prof. Reiss were disgusting.

So, I wanted to speak about these two issues, because it shows that these dangerous vaccine deniers really don’t have any evidence supporting their beliefs. As a result, they have to resort to violence, either literal or metaphorical. Either way, they are deranged. END_OF_DOCUMENT_TOKEN_TO_BE_REPLACED

These parents found unethical physicians who were willing to sign medical exemptions without the physician actually meeting the child in person, generally for an exorbitant fee. The sponsor of both bills, Senator Richard Pan, MD, observed this abuse and pushed forward SB276 to curb the abuse of California vaccine medical exemptions. END_OF_DOCUMENT_TOKEN_TO_BE_REPLACED

On 20 June 2019, after a long day of testimony on California SB276 from both sides of the mandatory vaccine issue, the assembly health committee voted 9 in favor, 2 against, and 2 abstaining to move forward with the bill which can prevent fake medical exemptions.

This post will describe the amended bill and then shortly address today’s events. END_OF_DOCUMENT_TOKEN_TO_BE_REPLACED

Ms. Dundas called for a Department of Justice investigation into what she described as a “multi-year campaign to override laws aimed to safeguard the privacy of minor children,” and made accusations of a cover-up. Note that the Department of Justice receives many and constant calls for actions, so just calling them to investigate means little without actually pointing to serious wrongdoing that justifies it. Ms. Dundas did not point to such wrongdoing.

The anti-vaccine press conference addressed efforts in the early days after the enactment of SB277 to address an emerging issue – fake medical exemptions. But in spite of the efforts to present this as a new discovery or a nefarious plot, it isn’t.

In fact, SB277 opponents knew of the efforts in early 2016 and responded in an aggressive fashion, targeting Dr. Charity Dean, who took the lead in them, with many personal attacks and inclusion in one of their lawsuits. There is also no real evidence of anything nefarious. There is, however, abundant evidence that fake medical exemptions were an issue in 2016 and onwards, and SB276 is directed at a real problem. END_OF_DOCUMENT_TOKEN_TO_BE_REPLACED

Let’s take a look at the bill and some other updates to the political machinations surrounding it. END_OF_DOCUMENT_TOKEN_TO_BE_REPLACED 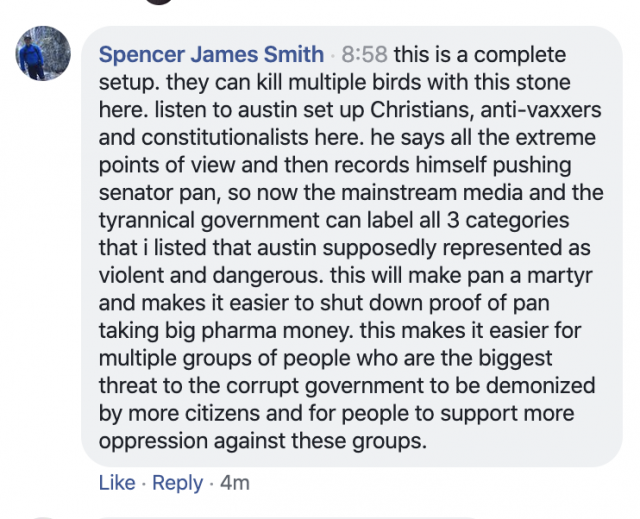 The bill still allows for legitimate medical exemptions (like immunocompromised children who need to be protected through the herd effect). Of course, Senator Pan is now pushing through legislation in the form of SB276 to reduce the abuse of the medical exemptions by many physicians with dubious excuses.

Although Sen. Pan is the leader of the California legislators, who are championing mandatory vaccines for children, others have withstood intense and hate-filled criticism from the anti-vaccine racist crowd.

END_OF_DOCUMENT_TOKEN_TO_BE_REPLACED

We have written a lot about Robert F. Kennedy Jr in these pages. The vaccine denialism of RFK Jr is a regular topic here, and let’s just say we are not a fan of his.

We’ve written about RFK Jr and serious journalists – they ignore him.

We’ve written about RFK Jr and his bad science – he was wrong again.

And let’s not forget that RFK Jr begged the anti-vaccine President of the United States, Andrew Wakefield’s good friend, Donald Trump to make him the head of some idiotic vaccine safety commission – never happened. END_OF_DOCUMENT_TOKEN_TO_BE_REPLACED