The old Skeptical Raptor is taking a bit of a break over the next few days to recharge his batteries for all of the pseudoscience that will be coming out in 2020. In lieu of new content, I will be republishing the top 10 most read articles on this blog during 2019. Here’s number 9 – the Big Pharma vaccine profits trope.

The old myth of the huge Big Pharma vaccine profits – it’s the subject of so many memes, tropes, and outright lies from the anti-vaccine religion. These vaccine deniers, who not only lack knowledge of science but also of basic corporate finance, believe that every Big Pharma CEO relies on vaccines for their next bonus check, which they use to buy their new Ferrari to show off to imaginary vaccine-injured children.

I am not naive – public corporations have an obligation to their shareholders and employees to maximize profits. That’s capitalism, I suppose.

But where this trope goes off the rails is when you realize that vaccine profits would be eclipsed by medical industry profits if Big Pharma simply stopped producing vaccines. It’s ironic that the anti-vaxxers claim that Big Pharma’s greed gives us vaccines, but if they were truly greedy they’d be out of the vaccine business. 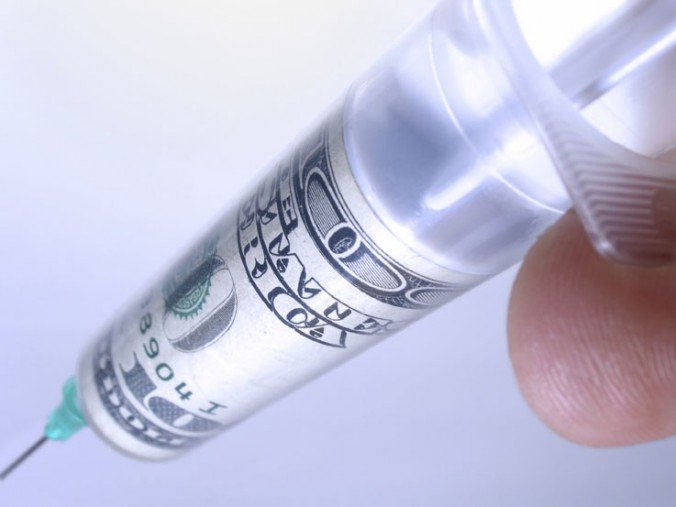 The vaccine deniers pollute the internet with their screeds about the Big Pharma vaccine profits. You’ve probably seen memes about Dr. Paul Offit, one of the world’s leading experts on vaccines, where it’s claimed that Dr. Offit earns money from vaccine makers because he was involved in the development of the rotavirus vaccine – they claim that this makes him biased about vaccines. Since most scientists have deep-seated ethics and morals, and can’t be bought at any price, this claim has always been laughable.

The anti-vaxxers love using childish ad hominem personal attacks – I don’t know how many times I’ve seen the silly imprimatur,  “Dr. Paul Proffit,” in anti-vaccine articles, comments, and memes. Seriously, that’s how they are going to “prove” that vaccines are a Big Pharma conspiracy? Does a 3rd-grade playground taunt have any value in the discussion about vaccine profits?

Of course, you can find whole threads of tedious commentary about Big Pharma vaccine profits on any typical anti-vaccine forum. One of the more illogical claims is that “maybe vax (sic) companies see vaccines as more of an investment? Break mostly even on what the vaxes cost to make and sell, but make a bank load of money on treating all the chronic problems they cause!”

This is the corollary to the old trope that Big Pharma makes more money on selling cancer “treatment” while hiding THE amazing cancer “cure” in a secret vault in a cave under the Greenland ice sheet. Well, now that this ice sheet is melting as a result of human stupidity about climate change, I guess that secret will be out.

Remember, vaccines don’t cause chronic problems. They prevent it.

These rants from these anti-vaccine zealots betray not only their lack of any sophisticated scientific knowledge but also their lack of knowledge of business finance. To be honest, I found finance to be as complicated and challenging as immunology.

Maybe their Dunning–Kruger cognitive bias, in which unskilled, and uneducated, individuals suffer from an illusory superiority of their knowledge and skills, causes them to overestimate their abilities in critical thinking abilities and knowledge of a field as much higher than average.

It would be difficult for me to actually claim that vaccines are not highly profitable. They are an important source of both income and profit to the handful of nearly 20,000 pharmaceutical companies that manufacture and market vaccines.

But here are some facts that might temper your expectations that vaccines are that valuable:

Let’s look at that US$24 billion in worldwide vaccine revenues more carefully. All of the numbers below are in billions of US dollars and were estimated based upon Vaccines: Expert Consult 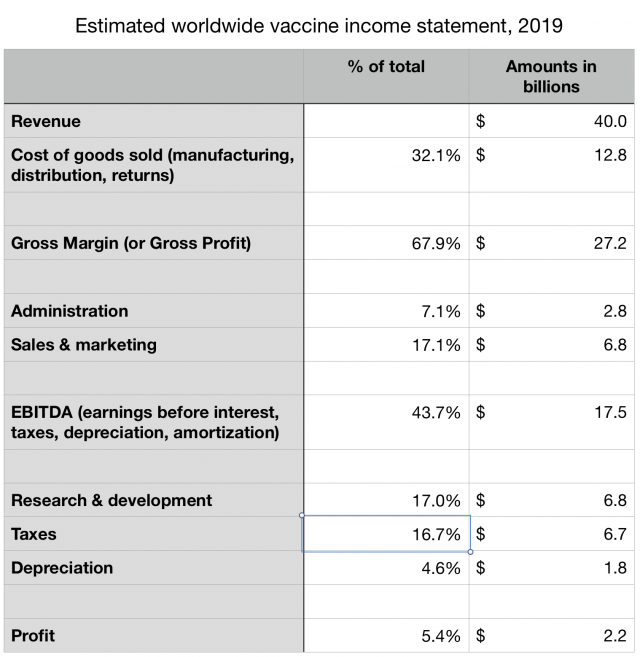 This lower profit for vaccines is because non-vaccine pharmaceuticals have a lower cost of goods as a result of fewer returns due to spoilage and change in antigens (like from flu season to flu season).

Regular pharmaceutical products rarely change from year to year, so something manufactured in 2018 can be sold in 2019 as long as it still has shelf life remaining. Moreover, distribution is a lot more expensive for vaccines, because they need to be shipped more carefully (which is much more expensive) to prevent spoilage.

Still, US$17.5 billion in EBITDA sounds like a boatload of cash, but let’s see what happens to that boatload of money.

When all is said and done, that US$40 billion Big Pharma vaccine revenue becomes around US$2.2 billion in net vaccine profits. Once again, I know we would all like to have a few billion sitting around to fund our lives, but in terms of Big Pharma as a whole, it’s really not much.

It may actually be quite a bit less because I’m ignoring things like cost of risk capital (even though Big Pharma is mostly self-funded, it’s not always so, and if that capital could make more money invested in gold or something, it’s a lost opportunity).

Given this level of profit, and spread over 50 or so vaccines, it’s hard to imagine that Big Pharma executives are sitting in that Boardroom laughing at how they’re printing cash and storing gold bars because of vaccines.

The 2018 revenue of the top 3 drugs sold worldwide, Humira, Eliquis, and Revlimid are equivalent to all of the vaccines. In other words, if I were a Big Pharma exec, I’d look at vaccines as rounding error on our income statement and balance sheet.

Are vaccines a good business strategy?

Going back to the laughing, unethical Big Pharma executives sitting in their boardroom, are they really conspiring to push vaccines on us, because it makes so much money? Or, as we saw above, would investing in another kind of medication make more money? Or would they make more money not even selling vaccines?

Let’s take an example of just one infectious disease, measles. According to the CDC, one hospitalization for a serious measles complication costs more than US$142 thousand. Typical cost breakdown of hospital billing indicates that pharmaceuticals and other consumables (syringes, IV’s, saline, etc.) are around 35-40% of the total cost to the patient (see Note 2).

So, just one serious case of measles, Big Pharma could get up to US$56,000 per patient. How much is one dose of the MMR vaccine to prevent measles? Oh yeah, it’s about US$21.22 per dose.

Let’s assume that Big Pharma ended the production of all vaccines today because the evil Big Pharma execs wanted rapidly increase their profits. According to the CDC (pdf), there are about 4 million births in the USA every year. Starting today, those 4 million children annually will not be vaccinated, and the vaccine deniers will be dancing in the streets.

Let’s look at the hospitalization rate for those 4 million children for every single vaccine-preventable disease (see Notes 3 and 4):

Of course, this is an imaginary scenario where everyone stops vaccinating because the anti-vaxxers win the day. Despite the fear, uncertainty, and doubt pushed by them, the overall vaccination rate remains in the low to mid 90% range.

But let’s get back this imaginary scenario where we stop vaccines. Outbreaks, epidemics, and pandemics would soon occur within the first 1-2 years after we end vaccination. Based on information developed by the CDC and others, the total worldwide economic burden if we suddenly ended vaccines would exceed US$50 billion (and this ignores flu pandemics that might suddenly ravish the pediatric population).

If we stick with the estimate that about 40% of the cost of hospitalizations will fall to Big Pharma, then they would make about $20 billion a year, worldwide, from not vaccinating. But remember, most vaccines are given, at most, 2-3 times, so, long-term, the revenues derived from vaccines is rather flat, unless new diseases are prevented. But, the revenues from the diseases themselves repeat every single year, and possibly multiple times per child.

And most of the products used to treat these diseases don’t require the research and capital investment that vaccines require. In other words, the income derived from vaccine-preventable diseases would be more profitable than vaccines.

If we really believe that Big Pharma executives are greedy sociopaths looking for more money, then we have to carry that descriptive to its logical end. They would be ending vaccines tomorrow. Maybe today, if it’s not too late.

But there’s more about vaccine profits

Actually, there are other issues that become problematic if we suddenly had this size of an epidemic. For example, the number of ICU beds per capita has dropped by 75% since the 1960s partially as a result of the reduction in numbers of children with infectious diseases. See the irony there?

If we suddenly stopped vaccinating because Big Pharma wanted to make billions of more profits, our hospitals would be overwhelmed. And guess who’s making money then? Big Mortuary. Because children will die at much higher rates than in the 1950s because we couldn’t handle it.

And I’m ignoring all of the other burdens to modern countries if this happened. Parents who are unable to work. Long term healthcare costs for children who are seriously injured by these diseases. Emotional stress. Overwhelmed hospitals that can’t treat other chronic conditions. Even countries that have superior healthcare systems would collapse under the strain.

So, all of you people at Age of lying about Autism (see Note 5), how much money are YOU receiving from Big Pharma to create the illusion that vaccines are dangerous? Because, now I have uncovered the real goal of Big Pharma–get rid of vaccines. Yes, obviously anti-vaxxers are the real shills for Big Pharma. How unethical can you be, sacrificing the lives and health of children for a few dollars from Big Pharma?

And I haven’t gotten to Big Iron Lung who has waited 60 years for the chance to get back into the game. I bet they’ve been investing in shills to push lies about polio vaccines.

I’m not naive. I know that pharmaceutical companies manufacture vaccines because they are able to make a decent profit, the goal of any corporation. But the profits are used not to buy gold bars to give as gifts to executives (or to pay me), but most of it is plowed into future generations of better drugs and devices.

They are not trying to harm humanity, because if they were ruthlessly profit motivated, like the narrative pushed by the science-denying anti-vaccine crowd, Big Pharma would close down vaccine research and manufacturing, and wait a year for huge epidemics.

Is Big Pharma perfect? Hell no, and I’ve said it before.

But vaccines save lives. And Big Pharma makes sure that happens. And they make that happen, despite the better profit scenario of not making one single vaccine. Because vaccine profits aren’t quite what the anti-vaxxers believe.

Editor’s note – this article was originally published on November 2015. It’s been updated to fix broken links, to use updated financial data, and to copyedit the article.