This article about vaccine ingredients and how they are not equivalent to injecting disinfectants was written by Dorit Rubinstein Reiss, Professor of Law at the University of California Hastings College of the Law (San Francisco, CA), who is a frequent contributor to this and many other blogs, providing in-depth, and intellectually stimulating, articles about vaccines, medical issues, social policy, and the law.

On April 23, 2020, President Donald Trump speculated about the possibility of hitting people with internal, high doses of ultraviolet light or injecting disinfectant to treat COVID-19, highly dangerous suggestions.  Whatever his intent, the impact was such that companies selling disinfectants felt a need to warn people against injecting it.

At least in part, there is concern that the President’s comments about disinfectant were motivated by lobbying from a group selling a dangerous supplement that is, in essence, industrial-strength bleach,  a supplement touted in the past as a magical cure and used against children with autism by misguided parents and sellers willing to harm them.  A group selling the supplement was recently subject to a court order after touting it as a cure for COVID-19.

Shortly after this, anti-vaccine sites started making posts saying that if people object to injecting disinfectants, why are they vaccinating. Here is one example. 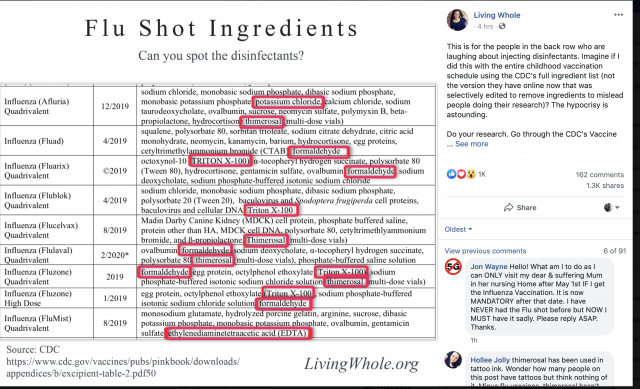 There are three points that deserve making in relation to this new claim.

I would add that, like the anti-vaccine people sharing these claims, I am not a scientist. But I consulted with several scientists before writing this post and had several people read the draft. The reason I am doing it and they are not is because of their time constraints. I volunteered to write – I can do this fairly quickly, with the input they provided.

Multiple studies show that vaccines save lives and prevent harm. A scientific consensus exists that vaccine risks are small and far outweighed by their benefits,  and recent studies further support that.

When experts recommend vaccines, they do so because abundant data shows vaccinating is a good idea. Most people do not need to be told that there is no equivalent evidence supporting injecting disinfectants. 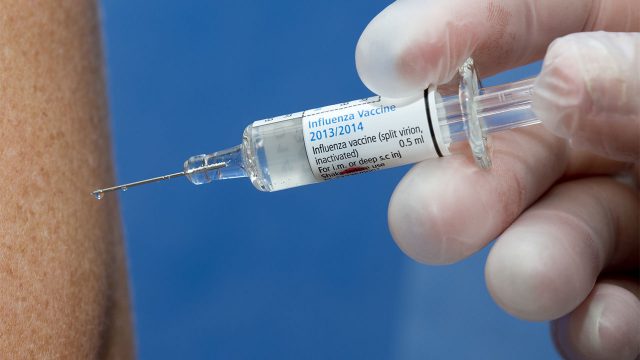 Not every vaccine ingredient is a disinfectant

What is a disinfectant? The Miriam Webster Dictionary defines “disinfectant” as:

…an agent that frees from infection, especially: a chemical that destroys vegetative forms of harmful microorganisms (such as bacteria and fungi) especially on inanimate objects but that may be less effective in destroying spores.

That is a pretty specific term for something with a specific function. Obviously, that does not mean “any ingredient that could, in some quantity or some form of use, pose a danger to human beings,” but that appears to be the way anti-vaccine activists interpret the term.

For example, in the screenshot above, the anti-vaccine activist writing as Living Whole Shared, she marked a number of ingredients that are, apparently, supposed to be disinfectants. But many are not.

Triton X-100 is not a disinfectant, it is a detergent. Formaldehyde is a fixative (and not an issue in the amount in vaccines), glutaraldehyde (its cousin) is a very poor disinfectant. Potassium chloride is not a disinfectant either and has medical uses, such as treating low blood potassium (which is dangerous) or replacing table salt for those who have certain types of high blood pressure.

Here is the Environmental Safety Guide of the University of Texas.  Note that it has one disinfectant, and one disinfectant only. Bleach, 10%. Not Triton-x100, not formaldehyde, not EDTA.

Similarly, here is a lab manual from Yale, for a BSL3 (biosafety level 3 lab, which are a step below the BSL4 labs, the ones where you need to wear a Hazmat suit). These labs are subject to extensive restrictions, much more than regular BSL2 labs, and have two options for disinfecting – either you autoclave the liquid waste, or you inactivate it with 10% bleach. No mention of formaldehyde, Triton-X100, or EDTA. Because these are not disinfectants. 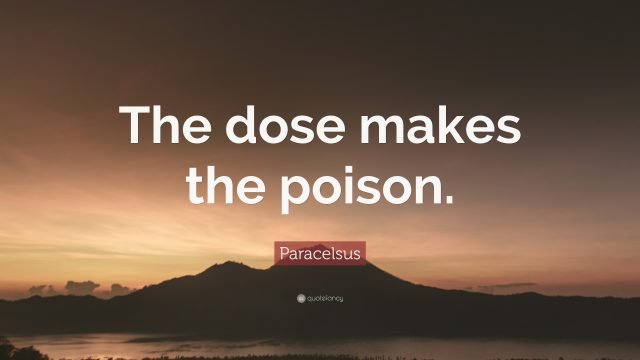 The dose makes the poison

As many scientists pointed out, concerns about vaccine ingredients are a common theme in the anti-vaccine movement (referred to, occasionally, as the “toxins gambit” – see, for example, this post by Dr. David Gorski).

But these claims are almost always based on misinformation, whether intentional or from lack of understanding. Anti-vaccine activists ignore the fact that the amount of any additional ingredient in a vaccine is minuscule. To remind readers, a vaccine dose is 0.5 ml, a tenth of a teaspoon – and most of that is liquid, usually water – distilled or with, say, sugar or salt. Even if your child gets 8 full doses of separate vaccines – and that practically never happens – your child would have gotten less than a teaspoon of liquid, most of which is water.

Besides water, a vaccine includes several other things:

Several excellent sources addressed different vaccine ingredients in more or less detail, explaining how we know that they are not an issue – for example, this article and this one.

And many more. Further, the entire vaccine – complete with ingredients – is subject to extensive safety studies.

People who make errors this basic are not a good source of information on public health, or on vaccines.