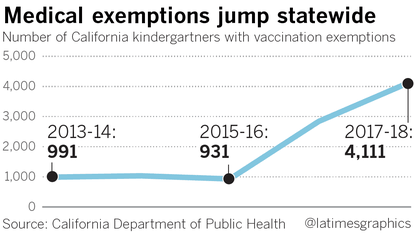 For practical reasons – not to overburden the school system, and to give most parents a transition period – the law was to be implemented gradually, as children reach a “checkpoint” – entering the system, entering kindergarten, or entering seventh grade.

120370.
If the parent or guardian files with the governing authority a written statement by a licensed physician to the effect that the physical condition of the child is such, or medical circumstances relating to the child are such, that immunization is not considered safe, indicating the specific nature and probable duration of the medical condition or circumstances, including, but not limited to, family medical history, for which the physician does not recommend immunization, that child shall be exempt from the requirements of Chapter 1 (commencing with Section 120325, but excluding Section 120380) and Sections 120400, 120405, 120410, and 120415 to the extent indicated by the physician’s statement.

In essence, this language left medical exemptions to the physician’s discretion, limiting it to licensed physicians – MDs or DOs, but it did not provide oversight. This was not added by SB277 – it reflected the pre-existing law. The only change was to add the language “including, but not limited to, family medical history,” which at least arguably changed nothing – where relevant, family medical history should already have been considered. Of course, anti-vaccine activists interpreted that language as justifying exemptions based on family medical history, even in cases where the CDC’s contraindication page expressly said that is not a valid contraindication.

The law’s vaccine medical exemptions provision required doctors to state the specific condition justifying the exemption. The amended Department of Health regulation after the act reiterated that requirement.

The problem of vaccine medical exemptions was documented in multiple articles:

There is evidence that a cottage industry developed in California for selling vaccine medical exemptions. Doctors found a way to make money off anti-vaccine parents, misled into being more afraid of protecting their children from the vaccine rather than from the diseases.

In a recent expose in San Diego, one doctor – whose practice was not related to children before the law – was responsible for a full third of vaccine medical exemptions.

While some rise in medical exemptions was expected after the law, as parents with justified medical contraindication to vaccines who previously used the very easy personal belief exemption now had to get an actual medical exemption, the level of increase – and the pattern, with medical exemptions concentrated in specific schools – did not fit a story under which this was the only cause.

In the Commentary attached to the article, Dr. Richard Pan and I suggested that one way to curb the abuse is to have the state oversee the medical exemption process, as is the case, for example, in West Virginia and Mississippi.

While the medical board can take action against doctors writing exemption – and is in the process of doing so in multiple cases – it faces an evidentiary obstacle: the parents benefiting from the exemption have no incentive to cooperate, and the information is harder to obtain without such cooperation.

In a powerful editorial in the Sacramento Bee on 24 March 2019, parent-advocate Leah Russin from Vaccinate California made the case for the change:

“We believe that medical exemptions should only be given to those who truly need them: the infant on the arm of a new mother in San Francisco; the young boy in Santa Cruz who was born needing surgery and must delay his vaccines due to his illnesses; the middle school student recovering from cancer in Los Angeles who wants to get back to school and visit with friends; or the twin girls in San Diego who are among the 1 percent for whom some vaccines don’t work.
All these children, every newborn and many adults rely on herd immunity for their survival. Every baseless and unjustifiable medical exemption jeopardizes their health and safety.

Vaccines are one of the most effective public health tools ever invented, but community immunity is fragile. The 2018 California measles outbreak – which began with an unvaccinated teen and spread to other unvaccinated youth, including two with suspect medical exemptions – is a grave reminder that vaccine-preventable illnesses remain a present threat to public health.

It’s once again time for parents, physicians, health officials and concerned Californians to speak up about the abuse of medical exemptions. It’s also time for the California State Legislature to act to end these abuses.”

On 25 March, the text of the bill appeared, and on 26 March 2019, Dr. Richard Pan and others held a press conference in which a strong case for the need for the bill was made. In the press conference, statements were made by Dr. Pan, Assemblywoman Lorena Gonzales who also introduced the original SB277 to the assembly in 2015, several medical professionals, several parents of immune compromised children, an immune-compromised man, and parent-advocate Leah Russin.

Naturally, anti-vaccine activists are unhappy with the California vaccine medical exemptions bill and mobilized against it. However, most news coverage correctly identified it as an effort to close what turned out to be an open invitation to abuse.

If you want to support this bill, please contact these California state senators: