If you cruise around the internet, engaging with the anti-vaccine religion (not recommended), you will pick up on their standard tropes, lies, and other anti-science commentaries, like the claim that vaccines cause diabetes. Of course, once one digs into the scientific facts, you find little supporting evidence.

In another example of the anti-vaccine zealot’s cherry-picking evidence to support their a priori conclusions, they ignore the utter lack of plausibility supporting any link between vaccines and Type 1 diabetes. At best, Classen has cherry-picked statistics to support his predetermined conclusions, “comparing apples to oranges with health data from different countries, and misrepresenting studies to back his claim.”

Moreover, Classen seems to come to his beliefs based on population-wide correlations that rely on post hoc fallacies, rather than actually showing causality between vaccines and diabetes. It’s like finding that a 5% increase in consumption of Big Macs is correlated with a full moon. Those two things may happen at the same time, but it would take a laughable stretch of real science to make a cause for causality.

What is Type 1 diabetes? The basic power source of our body is glucose, which is produced from almost anything we eat (carbohydrates, proteins, sugars, and fats). It is usually tightly regulated by the body so that when you have excess glucose in the blood, it is taken out of the blood and stored–but when the blood glucose drops, it is then released from storage to be used for energy.

In a complex agonistic interaction, the hormone glucagon, produced by other cells in the pancreas, is released when the blood glucose level is too low. Glucagon signals for a release of that stored glucose. (This once again goes to show how complex living systems are, and simple explanations are laughable and should be dismissed.) It’s a fascinating system of the body, and it’s remarkable that it works so well in 99% of people.

Type 1 diabetes (T1D) is an autoimmune disease where the body’s own immune system attacks the Islets of Langerhans, causing the production of insulin to drop or even to be halted. As of today, there are no cures, and the only way to treat someone is to regularly inject human insulin, which is produced by bioengineered E. coli. Interestingly, the human insulin gene has been inserted in GM safflower, to be used as another method of mass-producing human insulin.

Before the wide availability of insulin in the 1920s (usually pig insulin whose structure is similar to human insulin, but still caused a lot of allergic reactions), children simply died of the disease. Nothing could be done to prevent this death.

T1D should not be confused with two other types of diabetes, one called latent autoimmune diabetes of adults (sometimes called LADA or Type 1.5 diabetes), but really has no practical difference with T1D except the age of the commencement of symptoms. Instead of showing symptoms as a child, it appears in late adulthood, typically 30’s and early 40’s. Like Type 1 diabetes, the only treatment for LADA is insulin injections.

The other form is Type 2 diabetes (T2D), which is probably caused by a combination of genetics, obesity, eating behavior, and several other lifestyle factors. Usually, in T2D, the pancreas produces sufficient insulin, but the body’s cells and organs become “resistant” to the insulin, meaning that they ignore the signal to store glucose, and thus the blood glucose remains high.

Oral medications, behavioral changes, such as improved diet and exercise, can often help manage if not reverse T2D. And “natural supplements” probably won’t help at all. Eventually, a person with chronic T2D may also have to take insulin.

Type 1 and Type 2 diabetes are truly two different kinds of diseases with one common symptom, excess blood glucose levels. As far as I know, no one has ever attempted to link, with or without scientific evidence, T2D to vaccines.

There are serious health consequences of high blood glucose levels from poorly managed type 1 or type 2 diabetes. They may include: 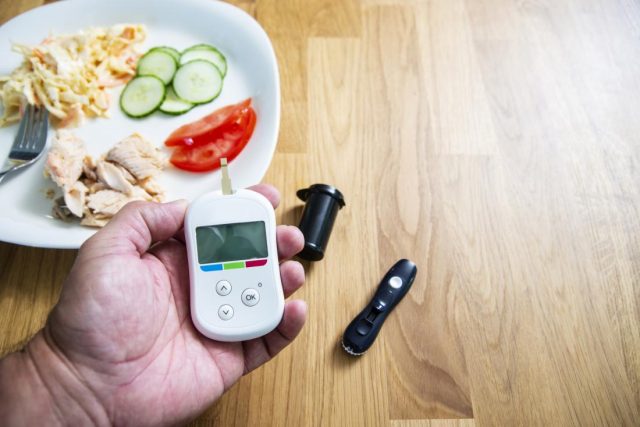 Although a scientific consensus has not been fully developed, it is clear that some sort of infection induces the autoimmune disease that causes the destruction of the insulin-producing cells in the pancreas.

Vaccines cause diabetes according to Markus Heinze

Probably the biggest champion of this “vaccines cause diabetes” trope is Markus Heinze, an antivaccine author, whose daughter contracted Type 1 diabetes when she was young. Predictably, he blamed a vaccine for his daughter’s T1D.

In a long-winded rant, Heinze brings up the old ad hominem argument about not trusting research paid off by pharmaceutical companies, because they’re hiding all the evil about vaccines. That doctors are clueless because Heinze’s 2 hours of Google research is more valuable.

Oh and his 18 months studying psychology at a low-level college in Kentucky somehow makes him an expert on anti-psychotics and depression medications. You know, because the four years of medical school, and another 8 years of post-medical-school training to be a psychiatrist is irrelevant to him. Yes, he’s an arrogant man who probably worships at the Dunning-Kruger altar of cognitive bias.

Using a pretzel-like logic, the pseudoscientific methodology of those like Heinze who lack a rigorous scientific background (and he has no formal education or training in endocrinology, virology, immunology, or anything), Heinze has taken numerous peer-reviewed articles that certain infections may be related to diabetes, and manipulated the results to support his truly unsupportable hypotheses.

He claims, and it’s hard to write this while stifling laughter, he found a 25-year-old article that showed that measles virus is found in the pancreatic tissue of someone with Type 1 diabetes. Heinze then blames the MMR vaccine for this infection, despite the fact that the MMR vaccines contain the live-attenuated (meaning non-pathogenic, it cannot spread in the body, nor incorporate itself into the RNA of any cells), and cannot infect pancreas cells.

Amusingly, Heinze actually thinks he’s got an “ah-ha” moment when all he has done is invent a conclusion, where the real researchers who did the real research made no such claim. Besides, since this study utilized a pancreatic cell culture, and we know those were probably not immunized with the MMR vaccine.

Why is Heinze so obsessive about vaccines and diabetes? Because his young daughter became diabetic, and at the time, typical of any parent, he lashed out at anything that he could blame for it.

I empathize with Heinze about his child, because I also have Type 1 diabetes. But I never blamed anyone or anything for it. I accepted it, and I use the most advanced science I can find to treat it. And because of that, I have little or no serious issues with the disease and hope to live a long life. And so will Heinze’s daughter.

But just because he’s going through this, he doesn’t have the right to invent bad science to scare people.

What explains the 3-5% annual increase in Type 1 diabetes diagnoses?

First of all, it’s difficult to really determine the exact increase in diabetes in the modern era. Remember, before the 1920s, children simply died from diabetes, so it’s almost impossible to determine the prevalence of the diseases before then. Even after 1920, insulin was not exactly widely available, and the methods to inject it were expensive. It’s possible that up through the 1950s, the rate of diagnosed T1D was lower than the actual number.

A lot of hypotheses have been offered by the scientific world (ignoring Heinze’s unscientific logic) regarding the increase in the rate of the disease.

Sure, some real scientists have actively sought out the possibility that vaccines are causal to T1D. But according to the best systemic reviews, the MMR vaccine is not linked to Type 1 diabetes. But don’t tell Heinze about this research, because using his vast scientific skills, he invented a link between MMR and diabetes, basically because the measles virus appeared in cell culture.

There is other evidence that clearly rejects a correlation between vaccines and diabetes. The Haemophilus influenzae type B vaccine is not linked to diabetes. In a large, population controlled study, there was no link, none, between any of the common childhood vaccines and Type 1 diabetes. None.

There is also no evidence that HPV vaccines are related to diabetes. None. We also have a more recent retrospective cohort study of nearly 1 million patients, published in Vaccine, which concluded that:

Once a hypothesis is solidly refuted by large clinical studies, it then becomes the responsibility of those who advocate the opposite hypothesis, that vaccines cause T1D, to bring evidence. And that evidence has to be of similar size and quality.

If not vaccines, then what is causing more diabetes?

In science, we can say, “I don’t know.” But we do know that there is no evidence linking vaccines to type 1 diabetes.

There is one hypothesis that lifestyle issues (obesity, diet, and sedentary behavior) might help set the stage for the autoimmune disease that leads to T1D. However, it’s probably very complicated from a viral trigger to obesity to the unknown.

But right now, we haven’t pinpointed the actual cause for the increase in T1D diagnoses across the world, except to know it’s some type of autoimmune disease. And just because we don’t know does not mean we can invent whatever cause strikes our mind. That’s what’s called an argument from ignorance.

In looking at this issue with a scientific and skeptical eye, here’s what I’ve found:

Ironically, researchers have found a potential method to reverse and/or prevent diabetes, and it might be available in the not too distant future. It’s a vaccine.

Editor’s note: This article was originally published in March 2014. It has been revised and updated to include more new scientific information, to improve formatting, and to fix dead links.