And here we go again with more anti-vaccine nonsense from Del Bigtree‘s Informed Consent Action Network (ICAN) – this time it’s about Merck’s VARIVAX chickenpox vaccine. And, of course, there’s nothing that they present that is accurate or worrisome.

VARIVAX is a well-studied vaccine that is both demonstrably safe and demonstrably effective. However, Bigtree and ICAN always think they have some amazing catch that shows that vaccines are bad. And they are never right, so that’s why we have to spend time taking it down.

Let’s see what they have to say, but first a little bit about chickenpox. 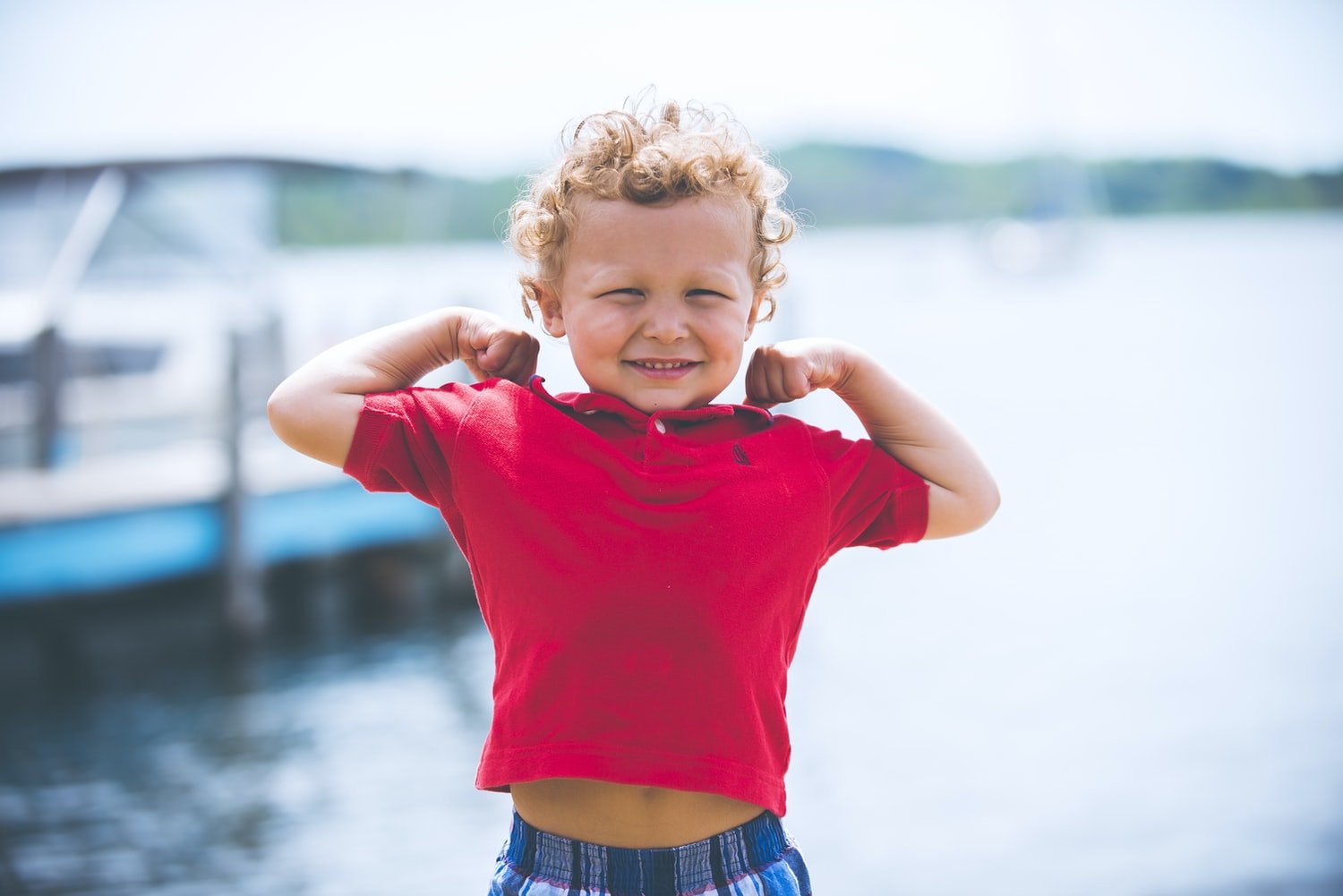 Despite the claims of the anti-vaccine crowd, chickenpox is a serious disease with some dangerous complications.

Chickenpox is an infection caused by the Varicella zoster virus (VZV). Although most cases are in children under age 15, it can attack older children and adults can get it. The virus spreads easily from person-to-person.

The classic symptom of chickenpox is an uncomfortable, itchy rash. The rash turns into fluid-filled blisters and eventually into scabs. It usually shows up on the face, chest, and back and then spreads to the rest of the body.

The disease usually lasts from 5-10 days.

Unfortunately, VZV stays in the body, usually in nerve roots along the spine, and, for unknown reasons, returns as a debilitating disease called shingles, which can be prevented with a vaccine.

Before the launch of the vaccine, according to the CDC, “an average of 4 million people got chickenpox, 10,500 to 13,000 were hospitalized, and 100 to 150 died each year.” And untold numbers who eventually developed shingles decades later.

VARIVAX was first licensed in Japan and the USA in 1995. In the USA, the CDC recommends the first dose at age 12 through 15 months and the second dose at age 4 through 6 years.

What Del Bigtree say about VARIVAX

Bigtree and ICAN used their well-worn and laughably overstated Freedom of Information Act (FOIA) requests that are never “gotchas” against vaccines. This time, of course, they want you to believe that the FDA was “hiding” information about the VARIVAX chickenpox vaccine based on some ridiculous claims.

Because I don’t want to let ICAN get clicks from real science people, here are screenshots of their press release: 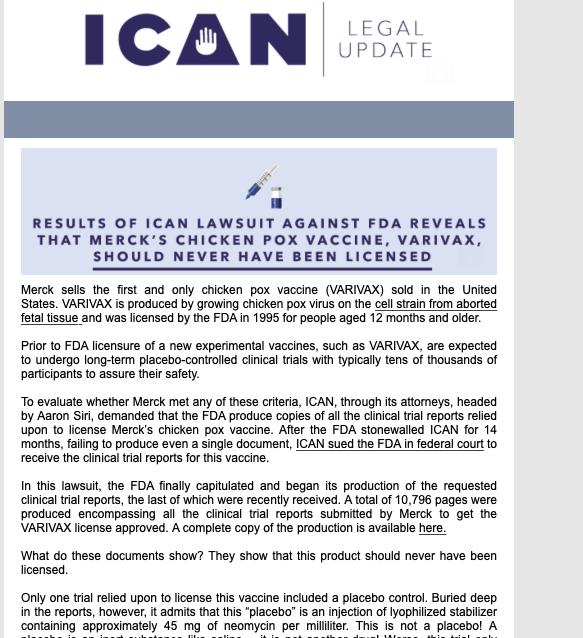 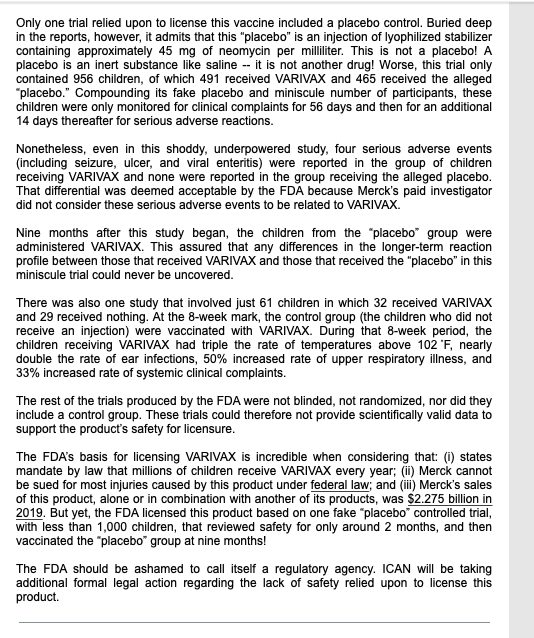 Before I head down the path of debunking some of the junk science presented in these ridiculous claims, let me remind the reader of one important point – there are 18 peer-reviewed studies that were eventually published to support the New Drug Application are included in the VARIVAX package insert. In other words, this comical lawsuit wasted the time of the FDA while enriching ICAN’s attorneys.

Seriously, you and I could have looked up those 18 peer-reviewed articles, gotten pdf versions, and sent them to Del Bigtree after about 47 minutes of work. Just remember that when you think Bigtree has done anything amazing, he hasn’t.

But, here we go with the “placebo control” trope that ICAN and many anti-vaxxers use. Before I get into the clinical research of VARIVAX, let me be clear about something – placebo-controlled trials are unethical if there is an antecedent vaccine. Of course, in the early 1990s, there was no previous chickenpox vaccine, so this point is not germane, though I just wanted to make it clear for the casual reader.

That being said, there are 234 clinical trials with the VARIVAX vaccine (as of 30 September 2020). I’m going to bet that Del Bigtree has NOT reviewed all 234 clinical trials. Moreover, Bigtree does not understand that every drug on the market is constantly monitored by post-marketing studies that provide the FDA and scientists with constant data about the safety and effectiveness of any drug, including vaccines.

Here’s the thing – the actual underlying article from Kuter et al., which followed the patients for two years, did not support any of the claims from Bigtree. Not a single one, period, full stop.

If we avoid cherry-picking 25-year-old clinical trials that were used in the original New Drug Application, we will find more robust data that show that the vaccine is very safe and very effective: 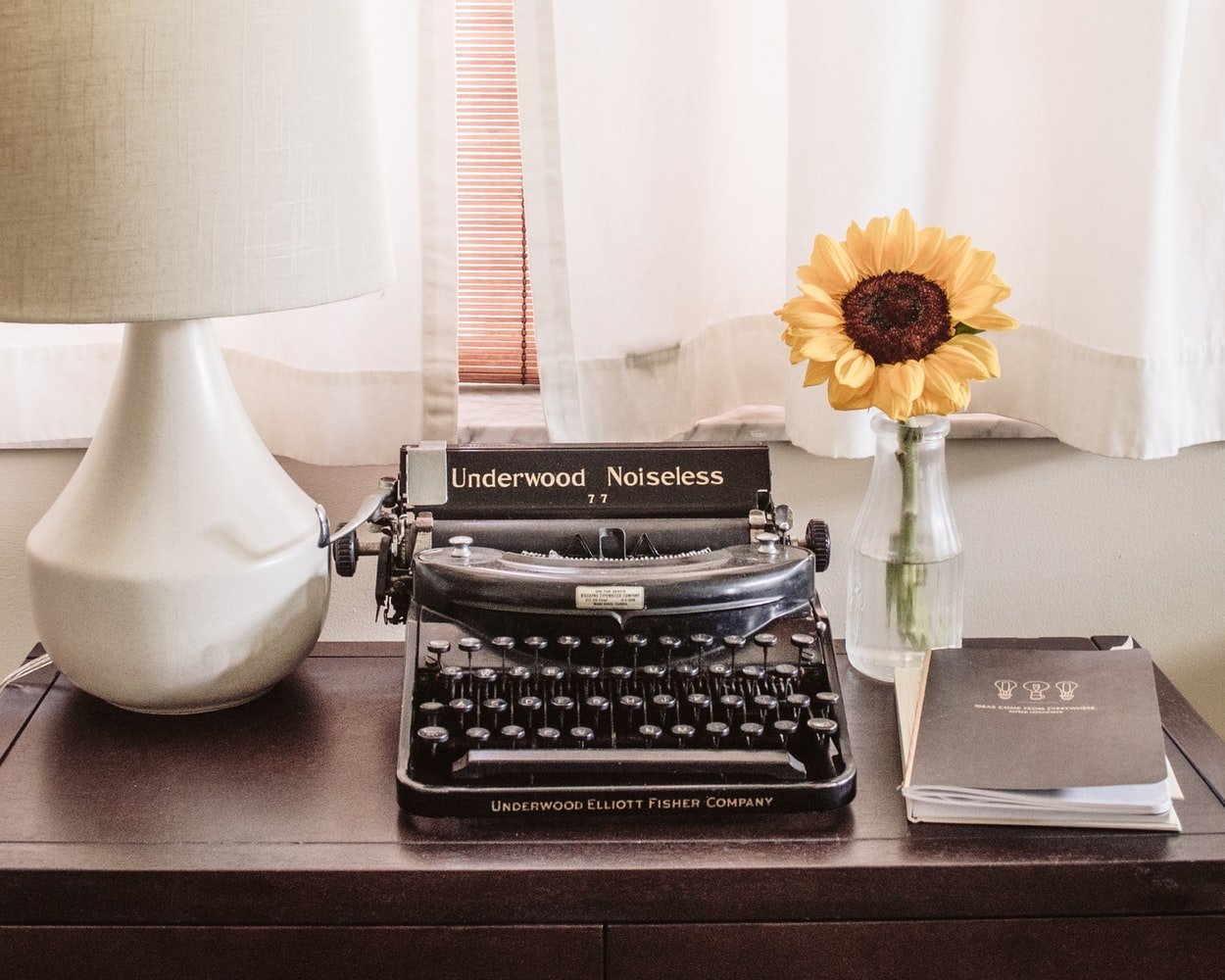 And once again, ICAN/Del Bigtree think they’ve won something. But they haven’t.

ICAN and Del Bigtree have told us nothing, absolutely nothing, about the safety and effectiveness of the chickenpox vaccine. But I’ve told you of several clinical trials that show that the vaccine is safe and effective.

So, I guess it’s the choice between the babbling of a non-scientist making false claims from a nonsensical lawsuit or the evidence-based writings of an ancient feathered dinosaur.