While writing an article about dog food myths, I ran across something that flabbergasted me – vegan cat food. I was literally going to scream at my computer screen, then I decided I’d redirect my thoughts to a post about it.

The ridiculous thoughts about pet care has caused some pet owners are avoiding vaccines for their pets because they believe it may cause them to become autistic. Let me remind the world that there is no scientific evidence of any link between any vaccine and the autism spectrum disorder.

I’m troubled by well-meaning, but scientifically illiterate, individuals trying to anthropomorphize their pets by pushing their beliefs about their own health (almost always wrong) onto their pets. This vegan cat food trend is just plain wrong for the health of their cats.

All about domestic cats

Domesticated dogs co-evolved with modern humans, as humans moved from a hunter-gatherer society to agricultural. This is important because domesticated dogs eventually evolved to eat human foods, usually in the form of scraps. The modern dog has different dietary requirements than their wolf relatives – that’s the result of natural (or artificial) selection by humans.

On the other hand, cats were domesticated from African wildcats around 9-10 thousand years ago. Like dogs, this occurred when human society moved to agriculture around this time. Domestic cats were valuable to early farmers to keep down the populations of vermin like rats and mice.

Unlike dogs, the artificial selection of domestic cats has not resulted in major genetic changes between domestic cats and their wild ancestors. Generally, the major change between domestic and wild cats is behavior, where the domestic cat is much more docile than the wild version. Of course, humans artificially selected for different phenotypes in cats that have led to the numerous breeds of cats (along with the proliferation of numerous deleterious genes).

Despite this domestication, cats retain behavior and physiology that allow them to live separately from humans. Thus, they remain obligate carnivores, and, unlike domesticated dogs, they have not become adapted to the more omnivore diet of humans. Domestic cats have evolved to consume raw flesh to meet their nutritional requirements to survive.

This leads us to the problems with vegan cat food.

All felids, that is, all cats included our pets, require a diet of animal flesh and organs. Much of the behavior of cats is related to predation, hunting and killing smaller animals, such as rodents and birds.

Cats also have higher protein requirements than dogs – the cat physiology is incapable of synthesizing various essential nutrients such as retinol, arginine, taurine, and arachidonic acid. To get enough of these nutrients to maintain their health, they need to consume almost pure animal flesh.

But it’s more than just nutrients. The digestive systems of cats have evolved to eat raw flesh. As a result, Felids have the shortest digestive tract to body size ration of nearly any mammal.

This evolutionary adaptation occurred because raw food is highly digestible, and there is no need for a long digestive tract with fermenting bacteria that are required by animals that eat plants (like us humans). Moreover, all cats have lost the metabolic abilities to break down carbohydrates since their diet contained almost none.

Physiologically, cats can only remain healthy by eating flesh and trying to make them do anything otherwise harms their health.

Of course, that hasn’t stopped some companies to push vegan cat food to those cat owners who are attempting to force their dietary choices onto a carnivore. If you look at the ingredients list, the first ingredients are brown rice, corn, and extruded soybeans, none of which can be digested by cats. They simply pass through the digestive tract of the cat, providing zero nutrition to it. 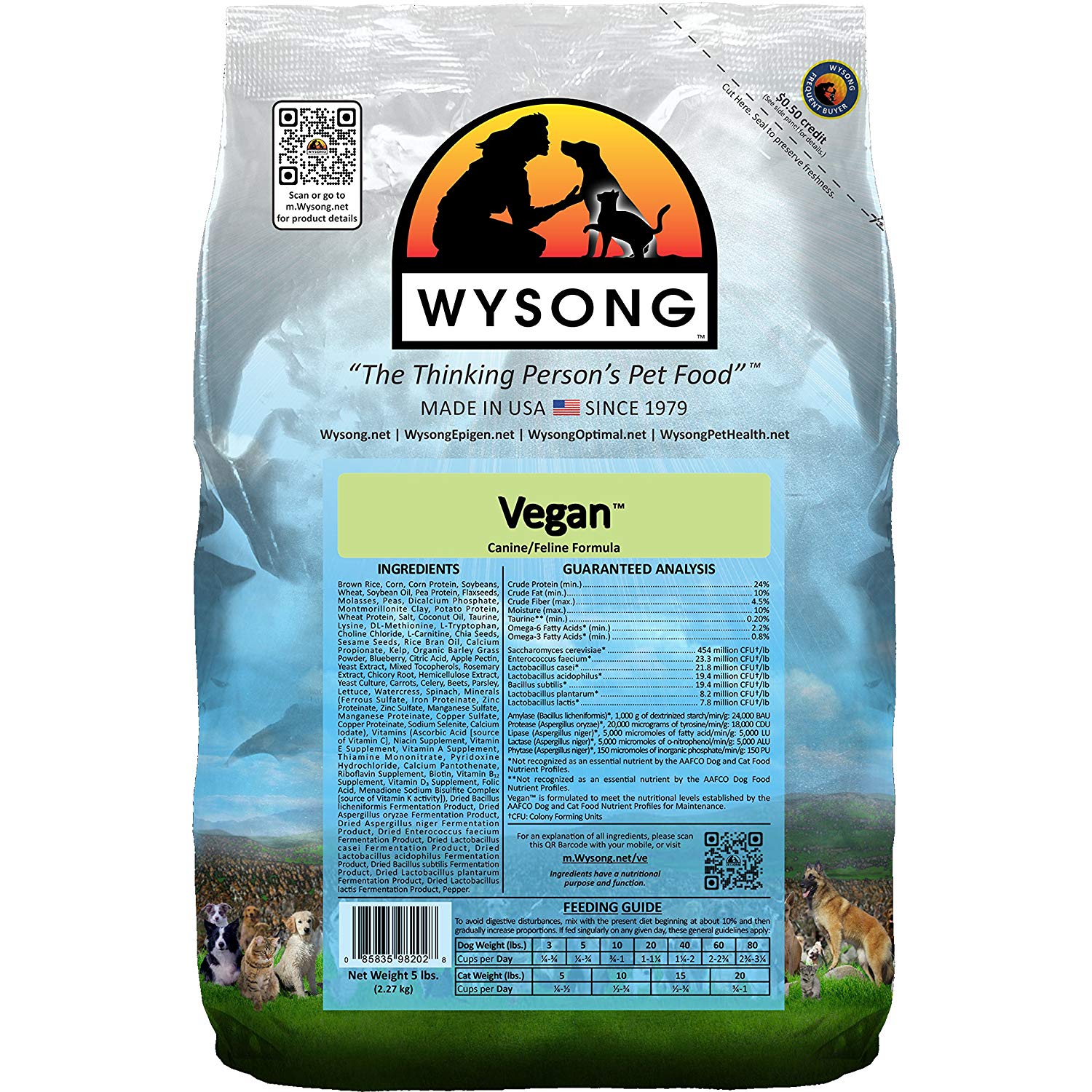 And it is missing the other micronutrients that cats get from eating flesh – taurine is the largest one. One more thing, this food is only 26% protein. Meat, in whatever form, is about the same, but it includes other biological compounds that are necessary for the cat’s health, including taurine.

Although it could be easy to supplement the diet with nutrients to make up for what is consumed in meat, one major issue remains – the cat is biochemically and physiologically incapable of breaking down plant carbohydrates, which are a significant portion of the calories from vegan cat food. Just to be clear, felids can utilize carbohydrates from the diet, since even meat contains carbohydrates within cellular and extracellular spaces.

Of course, cats who are fed vegan diets, but are allowed to roam outside of the house, are going back to being thorough carnivores. They’re not heading to the local health food store to get some organic rice cakes – they’re hunting rodents and birds, just like they have for millions of years.

Unfortunately, there isn’t a lot of scientific evidence that either supports or refutes the health benefits of a vegan diet for cats. Almost everything out there is based on anecdotes – cats “appear” to be healthier or unhealthier depending on the diet. Of course, a lot of these observations result from all kinds of selection, recency, and cognitive biases rather than actual clinical trials where the health of the cat is measured in an unbiased manner.

There is also one other issue with this vegan cat food. Natural prey is about 70% water, so the cat consumes mostly water when it feeds on prey. Although the evidence isn’t clear, it’s possible that the extremely low water content of dry cat food can lead to urinary issues.

A rather extensive review of the scientific literature of companion pet diets came to this careful conclusion:

They should also be aware that, although rarely conducted in accordance with the highest standards of evidence-based medicine, a significant and growing body of population studies and cases have indicated that cats and dogs maintained on vegetarian diets may be healthy—including those exercising at the highest levels—and indeed may experience a range of health benefits. Vegetarian animals also experience a range of health problems, but these problems are also prevalent in companion animals maintained on meat-based diets. Finally, pet owners should be aware that a significant body of additional studies have demonstrated health problems in domesticated animals maintained on various meat-based diets.

You might think that states that a vegetarian diet for cats is appropriate – yet, the most important point they make is that it does not meet the standards (high or otherwise) that we demand for medical treatments like drugs. I read some of the “research” they reviewed, and much of it was based on observations and not actual laboratory tests.

Many of the underlying articles also showed issues with cats and dogs who did not eat meat. In other words, I’m kind of skeptical of their conclusion – once again, it’s an article that has a preconceived conclusion, that a vegetarian diet is safe, and they only focused on studies that supported that conclusion.

I’m actually appalled by vegan cat food. I understand that veganism is preferred by many people because of animal welfare, our carbon footprint (which isn’t exactly supported by a scientific consensus), or health. I mostly look askance at all food fads, so I generally stay out of any discussions about vegan diets, especially when adherents proselytize about some moral superiority.

But this appears, from a purely evolutionary, biochemical, and physiological standpoint, to be mistreatment of our cats. If you look at the reviews on Amazon for one brand of vegan cat food, it seems that there are either 1-star or 5-star reviews.

Cats are obligate carnivores. Forcing them to be something that they are not, without changing their digestive tract, behavior, biochemistry, and dozens of other parameters just seem cruel. That appears to be the antithesis of why some people are vegans in the first place.

Sure, I could cherrypick a lot of claims that we could create a vegan cat diet, but looking at this from a strictly scientific perspective, I don’t think there is any robust, repeated, published evidence that vegan cat food is healthy for our feline friends.

As a result of these unique dietary requirements, without synthetic supplementation of the diet, a cat is unable to safely eat a vegan diet. Even with supplementation, producing a cat food that is complete and fills all of the nutritional needs of a cat is difficult (and dangerous) without adding meat to the diet. This is why they are referred to as obligate carnivores and require meat in their diet.